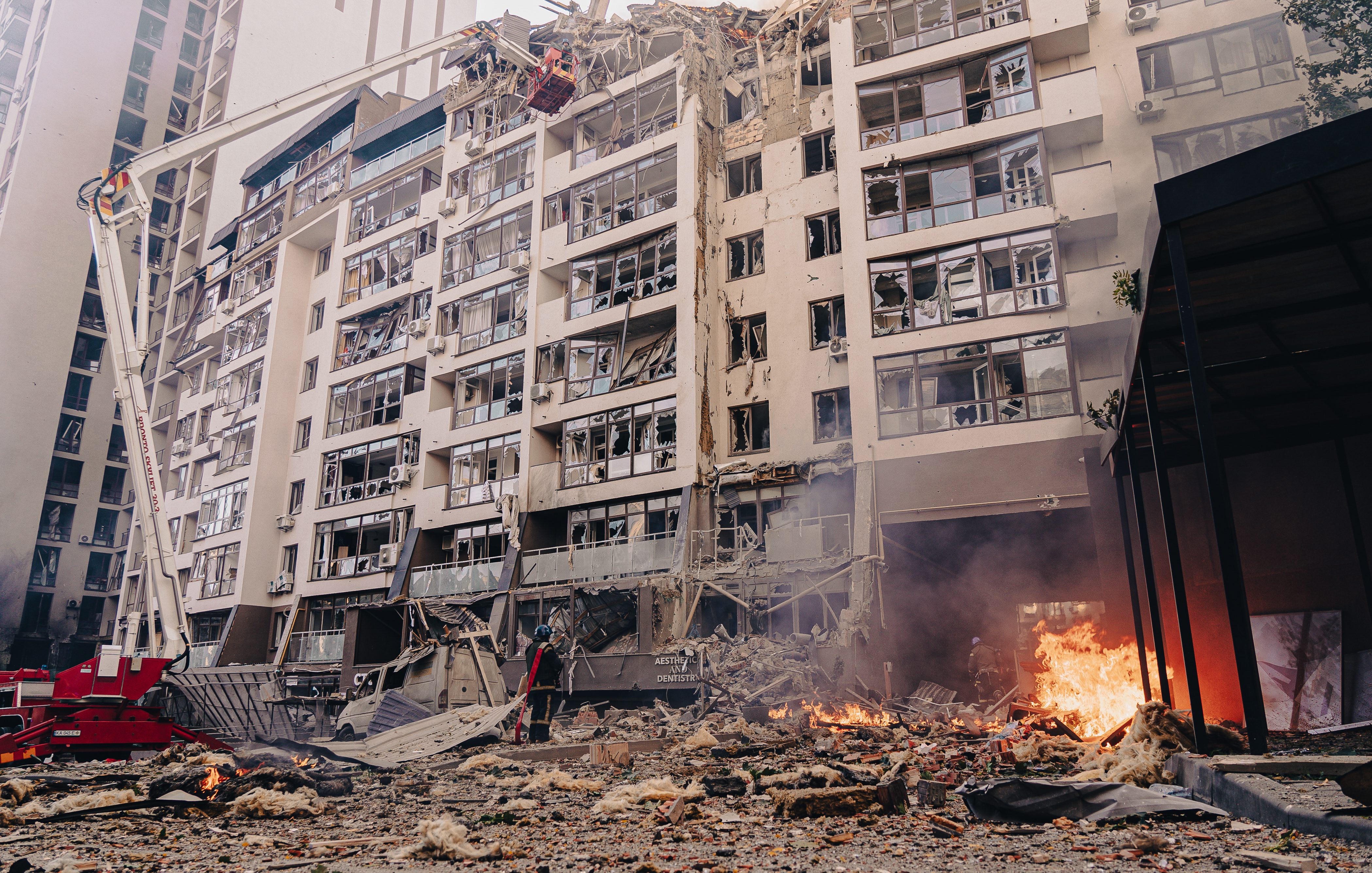 A nine-story residential building in central Kyiv was struck by a Russian missile early on June 26, 2022. (Dmytro Sanin)

Russian missiles strike Kyiv apartment building, kindergarten, killing 1 person. Russian missiles hit a nine-story residential building and a kindergarten in central Kyiv early on June 26, Mayor Vitali Klitschko said. Rescuers pulled out 25 residents from under the rubble at the apartment building in Kyiv’s Shevchenkivskyi District so far, Klitschko reported. At least one person was killed and six were injured, according to the mayor. One of the building’s residents confirmed to the Kyiv Independent that it’s the same building that was previously attacked in late April, killing RFE/RL journalist Vira Hyrych and injuring 10 people. Read our coverage here.

Institute for the Study of War: Missile strike on Kyiv likely ‘direct response’ to meeting of G7 leaders. The U.S. think tank said on June 26 that the Russian attack on Kyiv is “likely to coincide” with ongoing talks by Western leaders at the summit about aid to Ukraine, reminiscent of when airstrikes were conducted during UN Secretary-General Antonio Guterres’ visit to Kyiv on April 29. The ISW also reported that Russian forces are continuing to consolidate control of Sievierodonetsk and attack the outskirts of Lysychansk, as well as to intensify shelling of Ukrainian positions along the southern Axis.

Governor: 24 explosions reported in Sumy Oblast on June 26. Governor Dmytro Zhyvytsky said that Russian forces fired mortars on the oblast’s Shalyhinska and Yunakivska communities on the morning of June 26. According to the preliminary data, there were no casualties.

Bloomberg: Sanctions push Russia to first foreign default since 1918. Russia has defaulted on its foreign-currency sovereign debt for the first time in a century due to punitive Western sanctions imposed for its full-scale invasion of Ukraine. June 26 marked the expiry of a 30-day grace period for the payment of around $100 million to investors.

UK Intelligence: Capturing Sievierodonetsk is a significant achievement of Russian forces. According to the recent intelligence update by the U.K. Defense Ministry, Russia’s capture of the city is a significant achievement within the reduced objective of the invasion, which in April shifted from aiming to occupy the majority of Ukraine to a more focused offensive in the Donbas. “However, it is only one of several challenging objectives Russia will need to achieve to occupy the whole of the Donbas region,” the ministry said. Sievierodonetsk in Luhansk Oblast fell to Russia on June 25, bringing Moscow closer to taking full control of the oblast, 95% of which is already under the control of Russian forces.

Energoatom: Russian missile passed ‘critically low’ over nuclear power plant. Ukraine’s state-run nuclear company Energoatom accused Russia of committing “another act of nuclear terrorism,” saying in the early morning of June 26 that a Russian missile passed critically low over the South Ukraine nuclear power plant. “Any damage to the existing power unit will lead to severe consequences and could threaten the world with a terrible nuclear catastrophe,” the company said. It added that the missile likely flew in the direction of Kyiv, where on the same morning, a Russian strike hit a residential building, killing at least one person.

General Staff: Ukraine’s military inflicts heavy losses on Russian forces near Bakhmut. Russian troops withdrew after an unsuccessful assault near the village of Pavlivka, the General Staff of Ukraine’s Armed Forces reported. Russian forces are also trying to block Lysychansk from the south with the help of heavy artillery, the report said.

Official: Russian invaders making ‘business on blood’ in occupied Enerhodar. According to Enerhodar Mayor Dmytro Orlov, Russian occupying forces are demanding a ransom of $1,700 for the release of the hostages. Hundreds of citizens are currently being held captive, including skilled workers from the Zaporizhia nuclear power plant, and some have been beaten or electrocuted, Orlov said in a Telegram post on June 26.

Agriculture Ministry: Russia has stolen at least 400,000 tons of grain since Feb. 24. Before the current Russian invasion, there were 1.5 million tons of grain in the territories that are currently occupied by Russia, according to Taras Vysotsky, the first deputy agriculture minister.

Intelligence chief: Russia conducting covert mobilization campaign. Kyrylo Budanov, the chief of the Defense Ministry’s Intelligence Directorate, told Reuters that Russia is conducting a covert mobilization to replenish its ranks in the east of Ukraine, which is why there is no point in waiting until Russia exhausts its resources. He added that Ukraine could only achieve a victory against Russia through military force.

Intelligence: Russia increasing its military presence in Belarus. According to the Defense Ministry’s Intelligence Directorate, Russia plans to increase the number of operational and tactical aircraft in Belarus, claiming it’s needed to conduct a joint airspace patrol during drills. “A flight of 10 planes to Baranovichi airfield (Brest region, Belarus) is planned,” the intelligence said.

Zelensky calls on Belarusians to resist Kremlin’s military goals. In a virtual address to Belarusians on June 26, President Volodymyr Zelensky said, “the Kremlin has already decided everything for you, your lives are worthless to them. But you are not slaves or cannon fodder. You don’t have to die. And you can not let anyone decide for you what awaits you next.”

Russian shelling kills 2, wounds 1 in Kharkiv Oblast. Both women died in the settlement of Kluhyno-Bashkyrivka in Kharkiv Oblast as a result of Russia’s artillery shelling on June 26, according to Viktor Zabashta, head of the Emergency Medical Center in Kharkiv.

Governor: Russian forces fire on Sumy Oblast 150 times, launch unguided missiles from helicopters. Sumy Oblast Governor Dmytro Zhyvytsky reported that one person was killed and another injured due to Russian attacks on the communities of Yunakivka, Bilopillia, Krasnopillia, and Shalyhine.

Prosecutors: Russia’s war has injured at least 613 children since Feb. 24. According to the Prosecutor General’s Office, 339 children have been killed as of June 26. The figures are expected to be higher since they do not include casualties in areas where hostilities are ongoing and in the Russian-occupied areas, the prosecutors said.

G7 leaders to pledge indefinite support to Ukraine for ‘as long as it takes.’ According to a draft statement seen by Bloomberg during the G7 summit, Canada, France, Germany, Italy, Japan, the U.S. and the U.K., are set to announce that their countries “will continue to provide financial, humanitarian, military and diplomatic support and stand with Ukraine for as long as it takes,” the text says.

Biden confirms G7 to impose ban on Russian gold imports. U.S. President Joe Biden said on June 26 that the G7 countries will ban imports of Russian gold, which is “a major export that rakes in tens of billions of dollars for Russia.” Gold is a crucial asset for Russia’s central bank, which has restricted access to some of its assets abroad because of the Western sanctions.

UK ready to be guarantor for $525 million loan to Ukraine. The U.K. government said on June 26 that it’s ready to provide $525 million in guarantees for the World Bank lending to Ukraine. “The U.K. will continue to back Ukraine every step of the way because we know that their security is our security, and their freedom is our freedom,” U.K. Prime Minister Boris Johnson said. The lending will cover costs such as the salaries in the public sector and the running of schools and hospitals, the statement said.