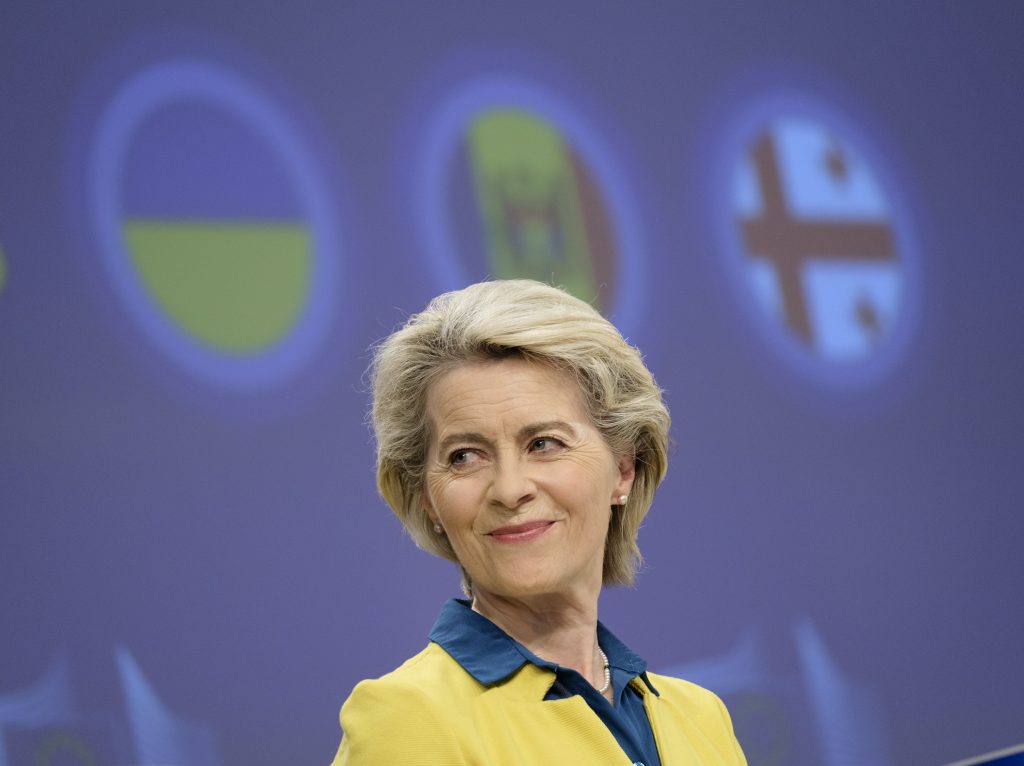 BRUSSELS, BELGIUM - JUNE 17: President of the European Commission Ursula von der Leyen speaks to the media in the Berlaymont, the EU Commission headquarter on June 17, 2022 in Brussels, Belgium. Today, the European Commission presented its opinions on the application for EU membership submitted by Ukraine, Georgia and Moldova as invited by the Council whilst the war wages on between Russia and Ukraine. The opinions are based on the Commission’s assessment in light of the three sets of criteria to join the EU agreed by the European Council: political criteria, economic criteria and the ability of the country to assume the obligations of EU membership (EU acquis). (Photo by Thierry Monasse/Getty Images)

Zelensky: ‘EU membership path will bring our victory closer.’ President Volodymyr Zelensky welcomed the European Commission’s recommendation that Ukraine be granted official candidate status to join the EU. “It’s the first step on the EU membership path that will certainly bring our victory closer,” he wrote on Twitter. All 27 EU member states must approve the final decision to grant the status.

Ukraine to introduce visa regime with Russia from July 1. President Volodymyr Zelensky announced the end of visa-free travel for Russian citizens starting from July 1, citing the need to counter “unprecedented threats” to national security, sovereignty and territorial integrity. Russian President Vladimir Putin in April signed a decree introducing visa restrictions for citizens of countries that Moscow defines as “unfriendly,” among them Ukraine.

Ukrainian paramedic released from captivity. President Volodymyr Zelensky said in his nightly address that Ukraine was able to secure the release of civilian paramedic Yulia Payevska, known as Taira, who was captured by Russian forces in Mariupol on March 16.

General Staff: Ukrainian forces liberate village near Russian-occupied Izium in Kharkiv Oblast. The General Staff of the Armed Forces of Ukraine reported on June 17 that the Ukrainian military had pushed Russian forces out of the village of Dmytrivka but Moscow’s troops continue to prevent Ukrainian forces from advancing to the border with Russia.

Evacuation from Azot chemical plant currently impossible. Luhansk Oblast Governor Serhiy Haidai said in a Telegram post that evacuating the 568 civilians, including 38 children, trapped in the plant in the fiercely contested city of Sievierodonetsk is not possible due to shelling and heavy fighting.

Ukrainian farmers complete this year’s sowing. The Ministry of Agrarian Policy and Food reported that Ukraine’s farmers have sown 13.4 million hectares of land in Ukrainian-controlled territories, which is approximately 95 percent of projected totals.

Institute for the Study of War: Russia continues to launch attacks on Sievierodonetsk, Ukrainian defenses remain strong. The U.S. think tank said in its assessment on June 17 that Russian forces continued their efforts to sever Ukrainian lines of communication to Lysychansk, both from the north toward Sloviansk and in the south near Bakhmut. Ukrainian forces are likely conducting a counteroffensive northwest of Izium intended to draw Russian forces away from offensive operations toward Sloviansk and disrupt Russian supply lines.

Russian tugboat sinks in Black Sea. Odesa Oblast Governor Maksym Marchenko said on June 17 that the Russian tugboat Vasily Bekh, which was hit by Ukrainian forces earlier in the day, has sunk. The tug had been reportedly equipped with a Tor air defense missile system.

Official: About 10-15 Mariupol residents describe cholera symptoms daily. Advisor to Mariupol Mayor Petro Andriushchenko reported, citing sources from the collaborators, that the hospitals in the Russian-occupied port city are poorly equipped, lacking reagent testing kits and antibiotics. The official added that patients are being turned away at hospitals.

Official: Ukraine needs to demine 270,000 square kilometers of its land. Interior Minister Denys Monastyrskiy said on June 17 that the total area that needs to be cleared of Russian mines is 270,000 square kilometers, including occupied territories. This is slightly larger than the entire nation of New Zealand. The minister said that Ukraine is in talks with the U.K., Italy and France to receive appropriate demining equipment which might cost millions of dollars.

Ukrainian activist arrested in Crimea. The activist took part in the blockade of trade between mainland Ukraine and Russian-annexed Crimea initiated by several Ukrainian civil society groups in 2015-2016, Russian state news agency TASS reported. The blockade was a protest against Russia’s annexation of Crimea and political repressions on the peninsula. The activist was allegedly a security guard of Lenur Islyamov, one of the organizers of the blockade, according to TASS. He has been charged by the occupation authorities with being a member of an “unlawful armed group.”

In a 73-minute speech on June 17 at the St. Petersburg International Economic Forum, Russian dictator Vladimir Putin lashed out at the U.S. for trying to “cancel” Russia, claiming it is a “fading world power” doomed to meet its imminent demise because of its “unipolar” policy. Read the main takeaways from the speech here.

French President Emmanuel Macron believes Ukraine will be granted candidate status next week, with the president’s visit to Kyiv, together with the leaders of Germany and Italy, set to unite Europe behind this decision. Read our story here.

European Commission President Ursula von der Leyen has issued the commission’s ruling, advising EU member states to grant Ukraine and Moldova candidate status. “We recommend to give Ukraine the candidate status, on the understanding that the country will carry out a number of important reforms,” von der Leyen said during a June 17 press conference. Read our story here.

Prosecutors: Russia’s war has killed at least 322 children, injured over 581 since Feb. 24. The figures are expected to be higher since they do not include casualties in areas where hostilities are ongoing and in Russian-occupied areas, the Prosecutor General’s Office said on June 17.

Death toll in Mykolayiv missile attack up to 2. Mykolayiv Oblast Governor Vitaly Kim also said that the number of people injured by the Russian attack had risen to 20. Five houses were damaged when a missile struck a residential area in Mykolayiv on the morning of June 17.

Johnson offers Ukraine major military training program. U.K. Prime Minister Boris Johnson has offered battlefield training for 10,000 Ukrainian service members during a surprise visit to Kyiv. “The program could change the equation of this war – harnessing that most powerful of forces, the Ukrainian determination to win,” he said.

Lithuania suspends transit of some goods to Russia’s Kaliningrad. Lithuania has told the Russian region of Kaliningrad that it will block the import and export of a large number of goods by rail because of Western sanctions, governor Anton Alikhanov said on June 17. Among the goods that would be affected are building materials, cement and metal products, he said. Kaliningrad is sandwiched between Poland and Lithuania along the Baltic Coast.

Eurovision 2023 won’t be held in Ukraine, contest offered to UK. The European Broadcast Union (EBU) said on June 17 that despite the tradition for the previous year’s winner to host the next event, the contest would not be held in Ukraine for safety reasons. Ukrainian Kalush Orchestra band won the 2022 contest, pushing the U.K. to second place thanks to votes from viewers. EBU will start talks with the BBC on possibly holding the next event in the U.K.

UK intelligence: 15,000 millionaires likely trying to leave Russia. The British Defense Ministry cited migration applications. Their motivation is likely opposition to the invasion and an attempt to escape the financial impact of the sanctions imposed on Russia, the ministry said. The ministry also said that the war is accelerating Russia’s path towards authoritarianism.