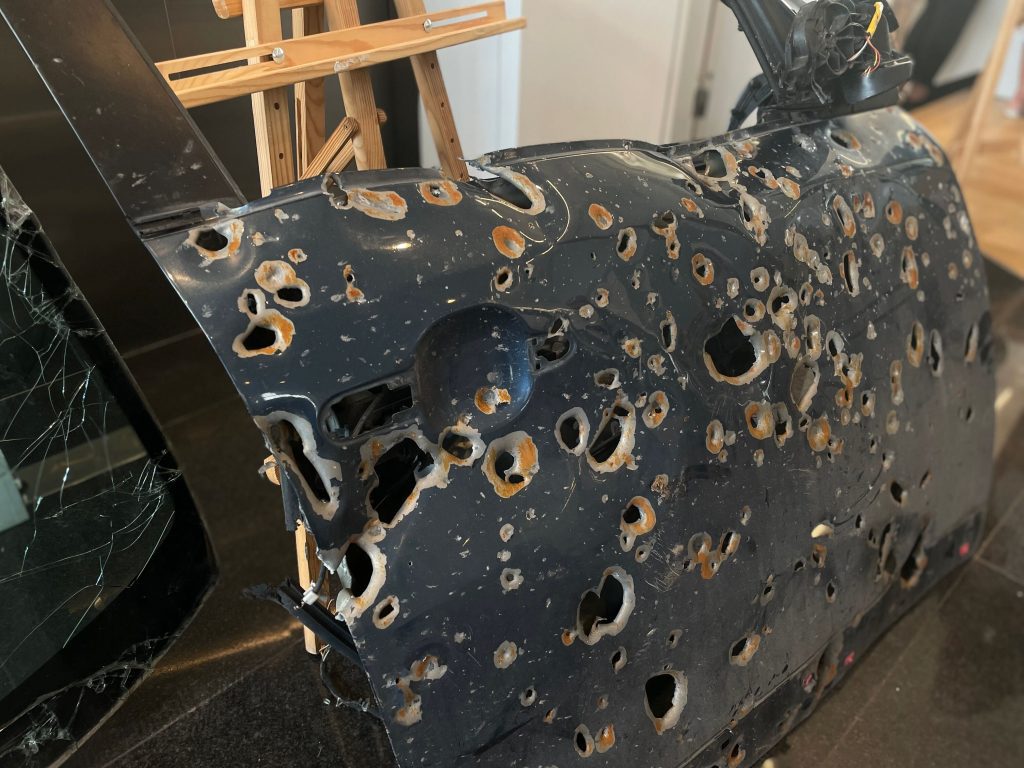 A car door damaged by shrapnel displayed at the exhibition “Irpin. Invincible” in Brussels on June 3, 2022. (Dylan Carter)

Zelensky: Stopping Russia’s war crucial for whole world. Speaking to 575 delegates from 40 countries at Shangri-La Dialogue held in Singapore, President Volodymyr Zelensky said via video address that it was crucial that the nations continue to send aid to Ukraine and that “this support is not only for Ukraine, but for you as well,” underscoring that the “future rules of this world are currently being decided” and Russia is still blocking ports in the Black Sea and Azov Sea.

Bloomberg: Biden says Zelensky brushed off warnings of Russia’s invasion. President Joe Biden said during a political fundraiser in Los Angeles that President Volodymyr Zelensky tuned out warnings that Russia would invade his country in the lead-up to the Feb. 24 attack.

Luhansk Oblast Governor: Intense fighting continues in Sievierodonetsk. In his video address on June 12, Luhansk Oblast Governor Serhiy Haidai said fighting continues in the key eastern city of Sievierodonetsk. Situation remains very difficult in the village of Toshkivka, on the northwestern outskirts of Sievierodonetsk, the governor reports. However, Ukrainian forces have successfully blocked Russia’s advance near Popasna. A large oil leak and massive fire were also reported at Azot chemical plant in Sievierodonetsk. Haidai said Russian shelling of the chemical plant caused a large fire to break out after several tons of oil leaked.

Zelensky calls for 7th EU sanctions package against Russia. President Volodymyr Zelensky added the European Union should stop consuming Russian energy completely, calling it “a fundamental security issue for us all.” As part of the sixth sanctions package, the EU imposed a partial embargo on Russian oil in May but fell short of imposing a natural gas embargo. European countries have been criticized for effectively financing Russia’s aggression against Ukraine by buying Russian energy.

Washington Post: US official says Russia likely to seize all of Luhansk Oblast in coming weeks. The Ukrainian cities of Sievierodonetsk and Lysychansk, which became the epicenter of the battle for Donbas, could fall to Russian forces within a week, the U.S. official quoted by the Washington Post said, speaking on condition of anonymity because of the sensitivity of the issue. This could create a de facto new front line that could last for some time.

Zelensky: Ukraine’s military gradually liberating Kherson Oblast, Russia suffers losses. In his nightly address, President Volodymyr Zelensky said that Ukrainian military is gradually liberating the territory of Kherson Oblast. “Today a village of Tavriiske was added to the list of the liberated settlements. There is some progress in Zaporizhzhia region as well.” Zelensky also said the Russians have suffered heavy losses since Feb. 24. “Do you remember how Russia hoped to capture the entire Donbas by early May? It is now the 108th day of the war… Donbas is holding on. The losses suffered by the occupiers, including in this area, are extremely significant. In total, the Russian army today has about 32,000 dead souls. For what? What did it give you, Russia?”

Institute for the Study of War: Russian forces resume attacks southwest of Izium and towards Sloviansk. The U.S. think tank said in its June 11 report, quoting Ukraine’s General Staff, that Russian forces have replenished fuel and ammunition in the Lyman area in preparation for offensive operations toward Sloviansk and Siversk. The institute previously assessed that Russian forces may attempt to cut off Ukrainian ground lines of communication in Siversk and conduct a shallower encirclement in lieu of an advance on Sloviansk.

Ukraine’s First Lady Olena Zelenska opens center for refugees in Lithuania. Ukraine’s First Lady Olena Zelenska has opened a center for Ukrainian refugees in the Lithuanian capital, Vilnius. Since the start of Russia’s invasion, Lithuania has sheltered more than 50,000 Ukrainians. “We wanted Ukrainians who were forced to come to Lithuania because of the war to have a truly native place. So that the center will be the place where it is possible to address on any matter – help or communication. To be able to study here, to spend leisure time, join a cultural event or educational course,” Zelenska said.

Azovstal, a steel plant in now Russian-occupied Mariupol, has become a symbol of Ukraine’s fierce resistance to the Russian invasion. Thousands of Ukrainian fighters defended the plant with little to no resources, refusing to surrender for nearly three months. In this episode of our podcast “Did the War End?” we hear from John Spencer, a leading expert in urban warfare studies, about what it took for Ukrainian soldiers to defend the plant, despite being drastically outnumbered.

Prosecutor General’s Office: Russia’s war has killed at least 287 children, injured 492 others. The figures are expected to be higher since they do not include child casualties in the areas where hostilities are ongoing and in the occupied areas, the Prosecutor General’s Office said. The report says that the killing of 24 more children in Mariupol was recently documented.

Russia fires 16 times on Donetsk Oblast in past 24 hours; deaths and injuries reported. According to the Interior Ministry, the police recorded damages to 30 civilian sites and infrastructure.

Four civilians found dead under rubble after Russian shelling in Kharkiv Oblast. The region’s State Emergency Service reported that a house in Chkalovske on the outskirts of Kharkiv was destroyed. Rescuers helped remove the bodies from the rubble.

Ambassador: Germany to deliver seven self-propelled howitzers to Ukraine around June 22. Ukraine’s Ambassador to Germany Andriy Melnyk said during an interview with Novoe Vremya that Germany has not yet delivered a single piece of heavy weaponry to Ukraine. The first delivery is expected around June 22. Germany is also expected to deliver Gepard self-propelled anti-aircraft guns to Ukraine.

Ambassador expects Germany to send IRIS-T missiles to Ukraine in October. Andriy Melnyk, the Ukrainian ambassador to Germany, said in an interview with NV, a Ukrainian magazine, that the October deadline is justified because the IRIS-T air defense systems are still being produced. Cutting-edge IRIS-T systems, which are comparable to U.S.-made Patriots, include both surface-to-air and air-to-air versions. German Chancellor Olaf Scholz has been criticized for blocking and delaying arms supplies to Ukraine, and Germany has not yet supplied any heavy weapons.

Von der Leyen: EU opinion on Ukraine’s membership will be ready next week. European Commission President Ursula von der Leyen told President Volodymyr Zelensky during a visit to Kyiv that the Ukrainian authorities had “done a lot” to get EU candidate status. She added that Ukraine had been “on a good track” even before Russia’s ongoing invasion. “We want to support Ukraine in its European journey,” she said.