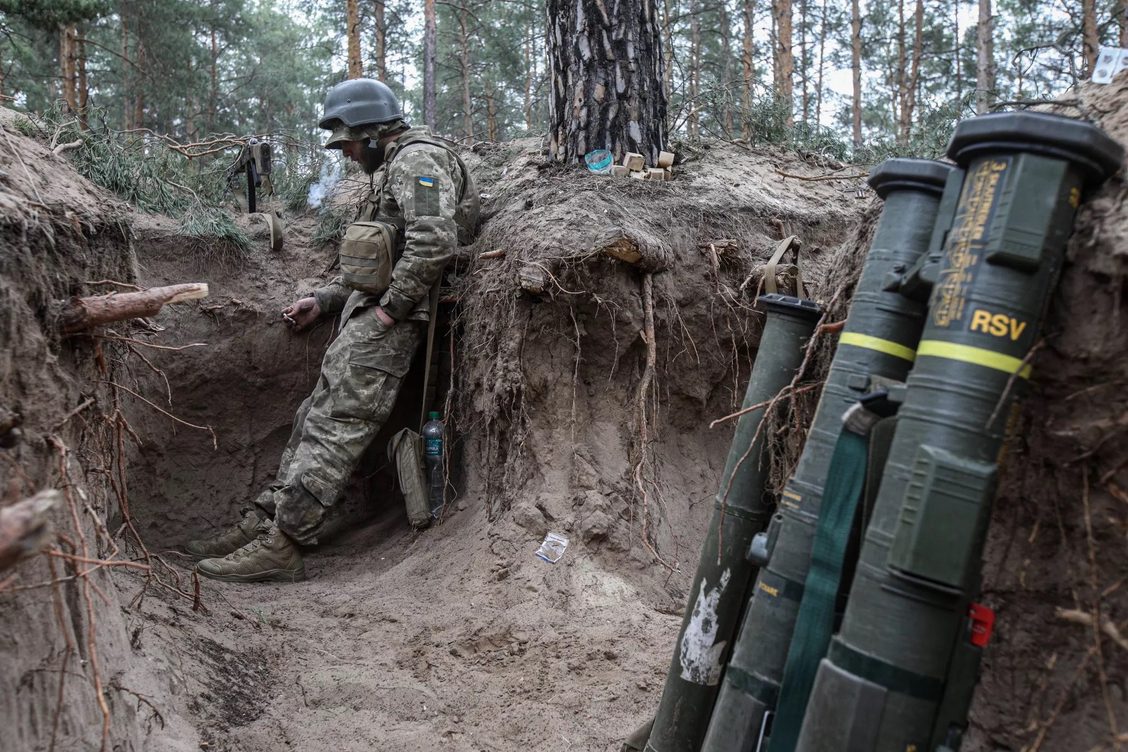 Ukrainian soldiers stand in the trench near the Lyman city of the Donetsk region on May 18, 2022. (Kostyantyn Chernichkin)

General Staff: Counteroffensive can end by September if all necessary weapons are provided to Ukraine. Dmytro Marchenko, major general of Ukraine’s Armed Forces, said on June 15 that a “point of no return” had been reached on peace agreements with Russia.

Russia’s damage to Ukraine’s agriculture reached $4 billion. Destruction or partial damage to agricultural land is worth $ 2.1 billion. Approximately 2.4 million hectares of winter crops worth $1.4 billion will remain unharvested due to occupation, ongoing warfare, and mine contamination. The cost of replacing and repairing damaged agricultural machinery accounts for $1 billion.

Prime ministers of Montenegro, Albania visit Kyiv Oblast. Montenegro’s Dritan Abazovic and Albania’s Edi Rama visited Irpin and Borodianka on June 15, both reiterating during their visit that they stand firmly behind Ukraine.

Zelensky to take part in NATO Summit in June. President Volodymyr Zelensky agreed to take part in the event, but he did not specify in what format he will take part. The invitation came from NATO Secretary General Jens Stoltenberg.

Russia shells Mykolaiv, casualties reported. At least one person was injured in Russia’s attack on a residential neighborhood in Mykolaiv at around 1 p.m. on June 15, according to Mykolaiv Mayor Oleksandr Sienkevych.

Russia has damaged or destroyed over 380 cultural heritage sites in Ukraine since Feb. 24. According to Deputy Minister of Culture and Information Policy Anastasia Bondar, Russian forces attack architectural, archeological, religious, and other monuments in Ukraine.

Police say they prevented terrorist attack on Ukraine’s leadership. First Deputy Interior Minister Yevhen Yenin hasn’t shared any details of the operation. According to Yenin, the national police have detained more than 800 people suspected of “sabotage and reconnaissance activities” since Feb. 24.

Governor: Russian shelling of settlements in Kharkiv Oblast injures 7 civilians. Kharkiv Oblast Governor Oleh Synyehubov reported that while no shelling was recorded in the city of Kharkiv, Russian forces continued to fire throughout the region, wounding four people in the Chuhuiv district, two in the Kharkiv district and one in the Izium district over the last 24 hours.

Over 1,000 people have been evacuated by medical trains from Donbas. Medical trains launched by Ukraine’s railway operator Ukrzaliznytsia with the Medecins Sans Frontieres two months ago have made 25 trips, evacuating over 1,000 people, including 690 injured and sick Donbas residents and 248 of their family members, as well as 78 orphans, the Health Ministry reports.

Institute for the Study of War: Russia faces difficulties implementing occupation agendas due to pro-Ukrainian pressure in occupied areas. The U.S. think tank reported on June 15, quoting the Ukrainian Resistance Center, that unidentified Ukrainian partisans targeted employees of the Russian Emergency Ministry in Mariupol on June 9 and 11. Russian occupation authorities are reportedly unable to open schools in occupied Berdiansk due to resistance from Ukrainian teachers, who are refusing to teach under Russian curricula. Such pro-Ukrainian action will likely continue to disrupt Russian efforts to consolidate full-scale administrative control of occupied areas and Russian annexation agendas.

Throughout Russia’s war, Ukrainians all over the country have shown remarkable courage, be it to help a stranger or save their loved ones. In this episode of our podcast “Did the War End?” we hear from one of those Ukrainians — Max — who drove from Kyiv to Mariupol in the middle of March to evacuate his family. Not once — but twice.

Even as the battle for Sievierodonetsk enters its critical stages and Russian forces storm into the fiercely contested city, Mayor Oleksandr Striuk said the evacuation of civilians still continues during every “quiet” moment. Read our story here.

Russia’s grand offensive operation in Donbas, ongoing for almost 60 days, has not resulted in any major successes for the Kremlin. But the battle rages on, increasingly brutal and fierce, as the situation draws ever closer to a critical point for Ukraine’s military. Read our story on Ukraine’s military expecting massive arms supplies as the war worsens.

1 killed, 6 injured after Russian missile attack on Sumy Oblast. Sumy Oblast Governor Dmytro Zhyvytskyi said late on June 15 that at least five missiles were fired on the outskirts of Hlukhiv, a small historic town located 100 kilometers north from Sumy. One person was killed and six injured in the attack. Separately, a civilian vehicle hit a landmine on one of the roads in the region, governor said, without providing details. Three people were killed and one person is being treated in hospital.

Prosecutor General’s Office: Russia’s war has killed at least 313 children, injured 579 others. According to the Prosecutor General’s office, on June 14 a baby was injured by Russian shelling in Zolochiv, Lviv Oblast. The office also reported the deaths of 25 children, aged 14 to 17, in Donetsk Oblast as a result of Russian shelling and bombing from March to May, 21 of which were in Mariupol. The figures are expected to be higher due to the difficulty of reporting in areas where hostilities are ongoing or in Russian-occupied areas.

Biden announces additional $1 billion worth of military aid, Milley announces HIMARS shipment. According to U.S. General Mark Milley, the package announced on June 15 is set to include HIMARS multiple rocket launchers to be sent before the end of June. According to U.S. Secretary of Defense Lloyd Austin, the assistance will include a number of additional howitzers, ammunition, as well as Harpoon coastal defense systems.

Reuters: Romanian President says Ukraine must be granted EU candidate status ‘as soon as possible.’ “It is a correct solution from a moral, economic, and security perspective,” Klaus Iohannis said after meeting French President Emmanuel Macron in Romania on June 15, as quoted by Reuters. Iohannis also added that there have been “efforts to find a feasible solution to differences among European powers,” Reuters reports.

Deutsche Welle: Turkey ready to host four-way meeting to unblock export of Ukrainian grain. Turkish Foreign Minister Mevlut Cavusoglu said his country is ready to host four-way talks with the UN, Russia and Ukraine in order to ensure transportation of Ukraine’s grain exports. The Food and Agriculture Organization estimated that 25 million tons of grain are stored in silos at Ukrainian ports which has serious implications for global food supplies.

Greece to send Ukraine up to 30 armored vehicles. Greek Prime Minister Kyriakos Mitsotakis said in an interview with Proto Thema that his country will send 20-30 Soviet-style infantry fighting vehicles to Ukraine. Greece will have them replaced by modern German-made vehicles. Mitsotakis said that Greece is helping Ukraine and at the same time strengthening its armed forces with newer equipment.

Bloomberg: US plans to announce additional $650 million in weapons for Ukraine. On June 15, U.S. President Joe Biden’s administration will announce providing additional weapons and equipment worth $650 million for Ukraine, for the first time including “vehicle-mounted Harpoon anti-ship missiles,” Bloomberg reports citing anonymous sources. According to Bloomberg, the package will also include $320 million for “secure radios and related equipment, $55 million for thermal night-vision optics, and $160 million for training.”

Canada to send $7 million worth of howitzer replacement barrels to Ukraine. Canada is sending 10 replacement barrels to Ukraine to maintain distance range and accuracy of the M777 howitzer artillery guns, country’s Defense Minister Anita Anand announced on June 15. Earlier this spring, Canada sent Ukraine four howitzers of this kind. The barrels on modern artillery guns, such as the M777 howitzer, have to be replaced after firing 2,500 rounds.

EU, Israel and Egypt sign deal for gas exports to Europe. The EU, Israel, and Egypt signed a trilateral natural gas deal in Cairo on June 15 as it seeks alternatives to Russian gas. “Natural gas from Israel, Egypt, and other sources in the Eastern Mediterranean region will be shipped to Europe via Egypt’s LNG export infrastructure,” the European Commission’s statement reads.