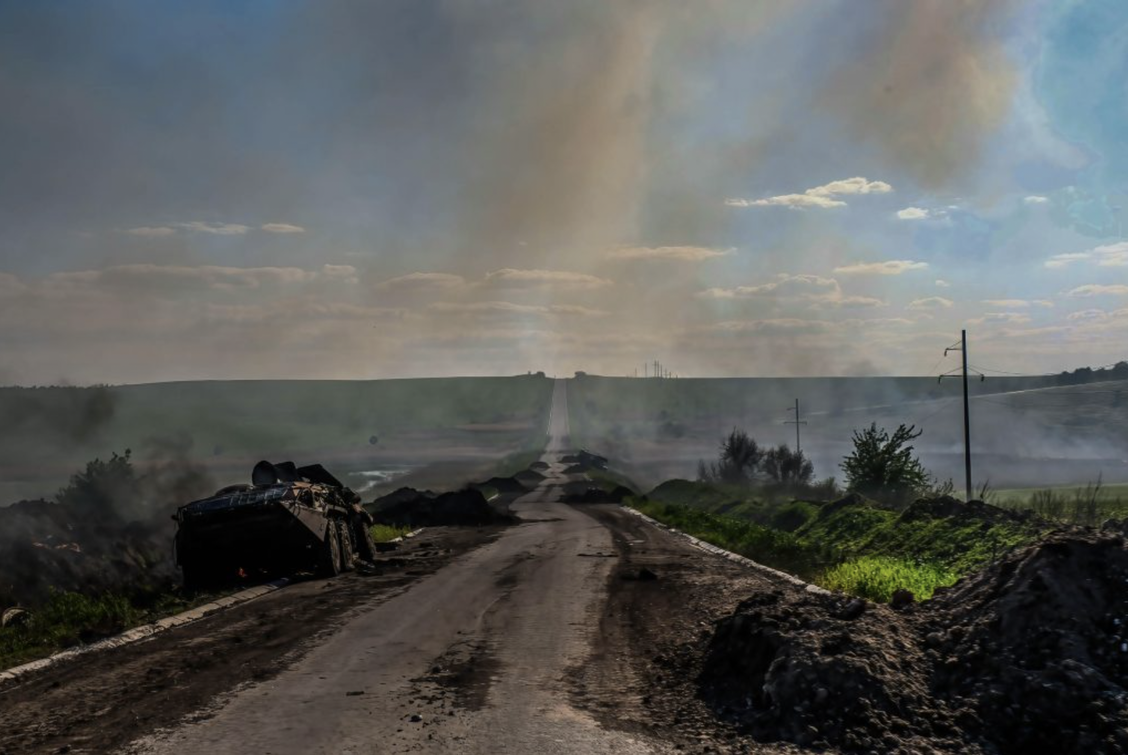 The view on the Bakhmut-Lysychansk highway on May 23, 2022, which has witnessed intense fighting due to Russia’s war against Ukraine.

Defense Ministry spokesman: Russia deploys additional tanks to Zaporizhzhia Oblast. Oleksandr Motuzianyk said up to 30 Russian T-62 tanks have been deployed to Vasylivka, a village roughly 35 kilometers south of Zaporizhzhia, reports ArmyInform news agency on June 8. On May 22, it was reported that Russian troops outnumber locals in the Vasylivka.

UK Defense Ministry: Russia continues its assault on Sievierodonetsk, unlikely that either side gained significant ground during last 24 hours. The U.K. Defense Ministry said in its daily briefing that Russia remained on the defensive on its flanks despite concentrating its offensive on central Donbas.

Institute for the Study of War: Kremlin’s efforts to censor information about deceased troops exacerbates domestic tensions. The U.S. think tank said in its latest June 7 assessment citing the Ukrainian Military Intelligence Directorate that the Kremlin reportedly assigned lawyers and psychologists to work with families of personnel of the sunken cruiser Moskva. Their aim is to convince the families to refrain from disclosing any information regarding the deaths of their relatives in an effort to crush rising social tensions in Russia.

Zelensky: ‘Fate of Donbas decided in Sievierodonetsk.’ President Volodymyr Zelensky said in his daily address to the nation that the city remains the epicenter of hostilities in the region. “It’s a very fierce battle. Perhaps, one of the most difficult ones of this war,” he said.

Russia-Turkey meeting on Ukrainian grain corridor ends without deal. In a meeting between Russia and Turkey in Ankara on June 8, Turkish Foreign Minister Mevlut Cavusoglu suggested that, as part of a UN plan to restart Ukrainian grain exports, Turkish warships could demine Ukrainian ports and escort Ukrainian ships to ensure safe passage. Meanwhile, Russia says it is Ukraine’s responsibility to demine its ports and that no further action from Russia was necessary to continue grain shipments. Ukraine, which wasn’t invited to the talks, said it needed guarantees that Russia would not use the sea corridor to advance its attacks on coastal cities like Odesa.

Kuleba: Ukraine won’t accept alternatives to EU candidacy status. Ukrainian Foreign Minister Dmytro Kuleba told journalists on June 8 that Ukraine meets the criteria for EU candidacy but there are skeptics in Europe who are trying to impose alternatives to full candidate status.

Ukraine’s military: Situation deteriorating in Russian-occupied Kherson Oblast. Ukraine’s Operational Command “South” said on June 8 that, due to the lack of medicine, it is difficult to treat injured civilians in Kherson Oblast. Many civilian homes and infrastructure have been damaged because of the fighting and leaving the oblast is “practically impossible,” as Ukrainians can only get out through occupied Crimea.

Ukrainian MP accused of treason to be expelled from parliament, party. Oleksiy Kovalyov, a lawmaker with President Volodymyr Zelensky’s party, went to occupied Kherson Oblast and publicly supported Russian occupation. The State Bureau of Investigation has opened criminal proceedings against the lawmaker. “He betrayed the Ukrainian people, betrayed his voters, betrayed Ukraine,” said Yulia Paliychuk, spokesperson of the party.

Ukraine, Russia exchange bodies of fallen soldiers according to 50-50 formula. Out of the 50 bodies of soldiers returned to Ukraine, 37 were defenders of the Azovstal steel plant in Mariupol, according to Ukraine’s Ministry of Reintegration of Temporarily Occupied Territories.

Radiation detectors at Chornobyl nuclear power plant back online for first time since start of war, radiation levels normal. Director General of the International Atomic Energy Agency Rafael Grossi said the continuation of data flow from the power plant is a positive step forward after a “long period of virtual information blackout.”

General Staff: Belarusian military training to create strike groups, send them to Ukrainian border. Ukraine’s military reported that Belarusian troops are also checking the readiness of their transport infrastructure during the drills set to last until June 11.

Russian-occupied Mariupol facing ‘medical collapse.’ Advisor to Mariupol mayor Petro Andriushchenko said on Telegram on June 8 that there is a catastrophic lack of medical staff in the city. Russian occupying forces are “‘persuading’ locals who are over 80 years of age to come back to work at the hospitals,” he wrote. Some 100,000 Ukrainians remain trapped in blockaded Mariupol without utilities, food, or water.

Ukrainian court seizes Russian, Belarusian property worth over $18.5 million. A pre-trial investigation found that Russian and Belarusian enterprises imported into Ukraine 420 railway cars together with fertilizers and metal rods in violation of Ukrainian customs legislation, evading large sums of taxes, according to Ukraine’s Prosecutor General’s Office and Bureau of Economic Security.

The Battle of Sievierodonetsk in Ukraine’s Donbas is an emotional see-saw, in which doom and gloom change to joy and hope constantly. But heavy fighting continues — and while Russia is running out of steam, the situation in the area remains very close to critical. Read our story here.

At the heart of the European Parliament in Brussels, a grand August Förster piano lies in pieces on the floor, blackened and burned. Now far from home, the instrument once stood proudly inside Irpin’s Central House of Culture, which was destroyed by shelling during the Russian army’s failed assault on the city. Read our story here.

Russian forces kill 4, injure 5 civilians in Donetsk Oblast on June 8. Pavlo Kyrylenko, head of the regional military administration, said that the situation in Donetsk “remains difficult,” as the front line is constantly under fire. A Russian missile attack destroyed a school in the city of Bakhmut on June 8.

Official: Up to 100 bodies found under rubble of many buildings in Mariupol. Petro Andriushchenko, an advisor to the mayor of Mariupol, said that, according to his sources in the Russian-occupied city, between 50 to 100 bodies are discovered under “every two out of five multi-storied apartment buildings.” Some of the bodies were reportedly taken to the local landfill. “It’s an endless caravan of death,” said Andriushchenko.

Kharkiv Oblast Governor: Russian shelling kills 5, injures 12 civilians over 24 hours. Russia continues to shell the city and oblast of Kharkiv with artillery and Multiple Launch Rocket Systems, Oleh Syniehubov said. He added that residential buildings and a supermarket were damaged during the attacks on Kharkiv.

Official: ‘Every five minutes a Russian soldier dies in Ukraine.’ Serhiy Bratchuk, a spokesman for the Odesa regional military administration, said that Ukrainian forces have struck Russian positions in the south at least four times over the past 24 hours. Several units of Russia’s military equipment and ammunition depots were destroyed. The number of killed Russian soldiers is not available at the moment. Air raid sirens went off overnight on June 8 in Odesa, however, no attacks were reported.

WSJ: UK to tighten restrictions on sanctions enforcement. As of June 15, the U.K.’s Office of Financial Sanctions Implementation will not have to prove that those who violate the country’s economic sanctions were aware of doing so, only prove that a violation occurred. This decision applies to all sanctions imposed by the U.K., including to those related to Russia’s war in Ukraine.

Brink: Ukraine receives $1 billion from US, more to expect. U.S. Ambassador to Ukraine Bridget Brink said on June 8 that an additional $7.5 billion in grants are “on the way” as part of a $40 billion package signed by President Joe Biden in late May. “Your strength gives us strength,” Brink said during a meeting on U.S. support for the Ukrainian economy.

Canada bans export of services to Russian oil, gas, chemical industries in new sanctions package. Among the 28 types of Canadian consultants banned from working with the Russian energy sector are advertising and public-relations agencies, as well as technical and management consultants.

20 self-propelled howitzers sent to Ukraine by Norway in use on frontline. Norwegian Minister of Defense Bjørn Arild Gram told NRK that Norway had provided 20 M109 howitzers, including spare parts, ammunition, and other equipment. The official said that Ukraine depended on Western support and that the development of Russia’s war indicates that it is now necessary to supply Ukraine with heavier weapons.