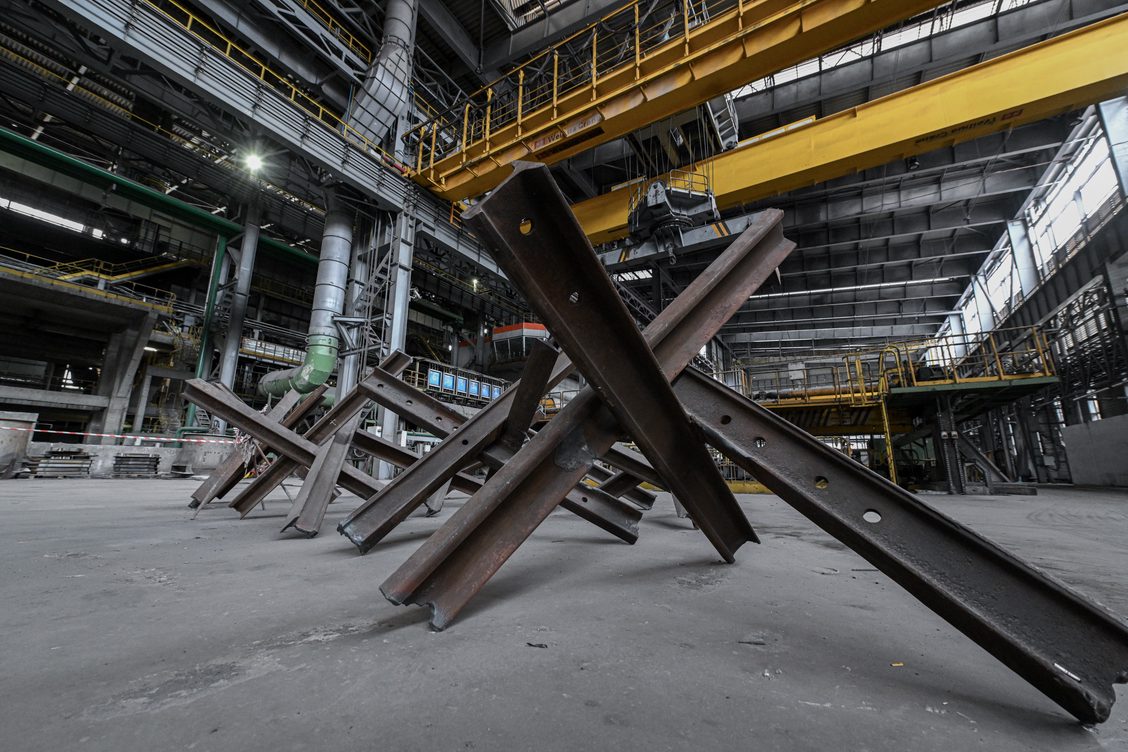 Anti-tank hedgehogs are seen in one of the workshops of ArcelorMittal, Ukraine’s largest steel company, in the city of Kryvyi Rih on June 22, 2022. (Andrii Gorb)

Minister: First ship carrying 26,000 tons of corn leaves Odesa port. Infrastructure Minister Oleksandr Kubrakov reported on the morning of Aug. 1 that the ship left Odesa as part of a UN-backed deal to unblock Ukraine’s Black Sea ports and secure a safe corridor for grain and other food export. The official added that there are another 16 vessels waiting their turn.

Institute for the Study of War: Russian forces transfer troops to southern Ukraine, may pause Sloviansk campaign. The U.S. think tank reported on Aug. 1 that Russian forces are continuing to move troops from northern Donetsk Oblast to bolster defensive positions in southern Ukraine, thereby pausing their assault on Sloviansk. The ISW notes that the situation is likely similar to when Russian forces “neglected” Zaporizhzhia and Kherson oblasts while undertaking assaults on Luhansk Oblast, and will potentially leave Russian positions in Donetsk Oblast open to a Ukrainian counteroffensive.

Prosecutor General says vacuum bomb killed 50 Ukrainian POWs in Olenivka on July 29. Ukraine’s Prosecutor General Andriy Kostin said a preliminary investigation by Ukraine and several international experts indicate that the bomb allegedly exploded inside the camp, where Ukrainian prisoners of war were held. “This is definitely not a rocket attack,” said Kostin.

Ukraine takes back 46 villages in Kherson Oblast since start of counteroffensive. Acting Governor of Kherson Oblast Dmytro Butrii reported the number, adding that the majority of the de-occupied territory is in the north of the region. “There are villages that are practically 90% destroyed, and they are still under shelling,” he said, as quoted by Interfax Ukraine news agency.

UK Intelligence: Russia likely adjusting its Donbas offensive after slow progress. The U.K. Defense Ministry said on Aug. 1 that Russian forces have only managed to make slow progress on the Bakhmut axis in Donetsk Oblast over the last four days and they are likely redesigning their tactical plans for a future offensive. Russia has likely identified its Zaporizhzhia front as a vulnerable area in need of reinforcement and is reallocating a significant number of its forces to southern Ukraine.

Ukraine appeals to Meta to stop blocking Ukrainians posting about Russian war crimes. The Ministry of Digital Transformation wrote an open letter to Meta (formerly Facebook), asking to make the moderation rules public and share a list of words considered unacceptable by social network algorithms. The ministry believes that that would help avoid mass blockings of Ukrainian bloggers and journalists who share photo and video evidence of Russian war crimes in Ukraine. “The Russian propaganda remains (intact), but the posts of Ukrainians become ‘sensitive content’ to the world,” the ministry stressed.

Ukraine earns nearly $20 million in first month of selling electricity to EU. Volodymyr Kudrytskyi, head of the state electricity grid operator Ukrenergo, said during a briefing that the figure is expected to increase significantly in the following months as the volume of electricity exports grows. Ukraine began exporting electricity to the EU using an interconnection with Romania on July 1.

Prosecutor General: International Tribunal for Russian crimes is a ‘request from Ukrainian society.’ The newly appointed Prosecutor General Andriy Kostin, a former member of President Volodymyr Zelensky’s party, said that he fully supports the prospect of having Russian top officials prosecuted by an international military tribunal for crimes against Ukrainians, similar to the one held in Nuremberg in 1945.

203 children missing in Ukraine. Kateryna Pavlichenko, Ukraine’s deputy interior minister, said on Aug. 1 that most of the children had gone missing in the war zone. She added that the National Police have recorded a total of 4,242 cases of missing children since the invasion started in February, and 4,039 of them have since been found.

Ukraine’s postal service halts work in Russian-occupied territories. Igor Smelyansky, head of state-owned Ukrposhta, said that the country’s postal service works only in the regions controlled by Ukraine. The state-owned company was able to operate in Zaporizhzhia and Kherson oblasts “under the pressure,“ pay pensions and transfer people money. However, starting Aug. 1, the company will not continue its work in occupied territories due to high risks and the threat of robbery.

When Russia started its full-scale invasion of Ukraine, one of the bigger surprises on the domestic political front was the sudden turnaround of Oleksandr Vilkul, once a central figure of Ukraine’s pro-Russian political camp. Read our story here.

A controversial judge greenlighted by the Ethics Council, the main body tasked with spearheading judicial reforms, may be involved in corruption, according to an investigation by the Slidsvo.info investigative journalism project. Read our story here.

Update: 72-year-old man dies in hospital due to Russia’s morning strikes on Kharkiv’s residential district. Kharkiv Oblast Governor Oleh Syniehubov reported that one of the two people injured on Aug. 1 as a result of Russia’s attack on Kharkiv’s Saltivskyi district had died after being hospitalized. Russian forces also shelled towns in Kharkiv Oblast on Aug. 1, killing a 54-year-old man in Bohodukhiv.

Update: Death toll due to Russian shelling of evacuating minibus rises to 3. Ukraine’s Operational Command “South” reported that three people have now died from the Russian attack on a minibus near Dovhove, Kherson Oblast. The minibus was reportedly carrying seven people evacuating from the temporarily occupied village of Starosillia, Kherson Oblast. The survivors have been hospitalized in Kryvyi Rih.

UN: 5,327 civilians killed, 7,257 injured in Ukraine since start of Russia’s war. The UN’s human rights agency reported that, between July 1 to 31, 1,455 civilian casualties have been recorded in Ukraine - 355 civilians killed and 1,100 injured. Most casualties were reportedly the result of “explosive weapons wide area effects, including shelling from heavy artillery, multiple launch rocket systems, missiles, and air strikes.”

PM: Ukraine receives first 500 million euros of macro-financial assistance from EU. Prime Minister Denys Shmyhal said on Aug. 1 that Ukraine had received the first half of the 1 billion euro aid to overcome financial consequences of the war. The second half is expected to come on Aug. 2.

US to provide Ukraine with an additional $550 million security assistance package. The new military aid will include 75,000 rounds of 155mm artillery ammunition and an undisclosed amount of ammunition for the HIMARS rocket launchers to help the country meet “critical security and defense needs,” according to the Pentagon.

Ambassador: UK to hand over 2 mine countermeasures ships to Ukraine’s naval force. Ukraine’s Ambassador to the U.K. Vadym Prystaiko told Suspilne media that a group of naval sailors is already going through training to operate the ships, and the U.K. might transfer more of them to Ukraine in the future.

Reznikov: 4 additional HIMARS delivered to Ukraine. Ukraine’s Defense Minister Oleksii Reznikov thanked the U.S. administration for the new batch of the high-precision rocket launchers. “We have proven to be smart operators of this weapon,” he tweeted. As of July 25, Ukrainian Armed Forces used HIMARS to destroy about 50 Russian ammunition depots in Ukraine, according to Reznikov.

MARS II artillery rocket systems arrive in Ukraine. President Volodymyr Zelensky’s Chief of Staff Andriy Yermak and Defense Minister Oleksii Reznikov confirmed on Aug. 1 that the promised rocket systems are already in Ukraine. German Defense Minister said in late June that Ukrainian military will receive the MARS II MLRS after the training. Germany and UK have promised to hand over three systems each, and the United States – four.

McDonald’s won’t reopen in Ukraine in Aug. company says. Despite earlier media reports that McDonald’s may reopen its restaurants in Ukraine in August, Alesya Mudzhyri, head of Corporate Communications at McDonald’s Ukraine, denied this information. Earlier, Foreign Minister Dmytro Kuleba said that the authorities are persuading the management of McDonald’s to resume work in Ukraine. McDonald’s shut down operations in Ukraine on Feb. 24, when Russia launched its all-out war against Ukraine.