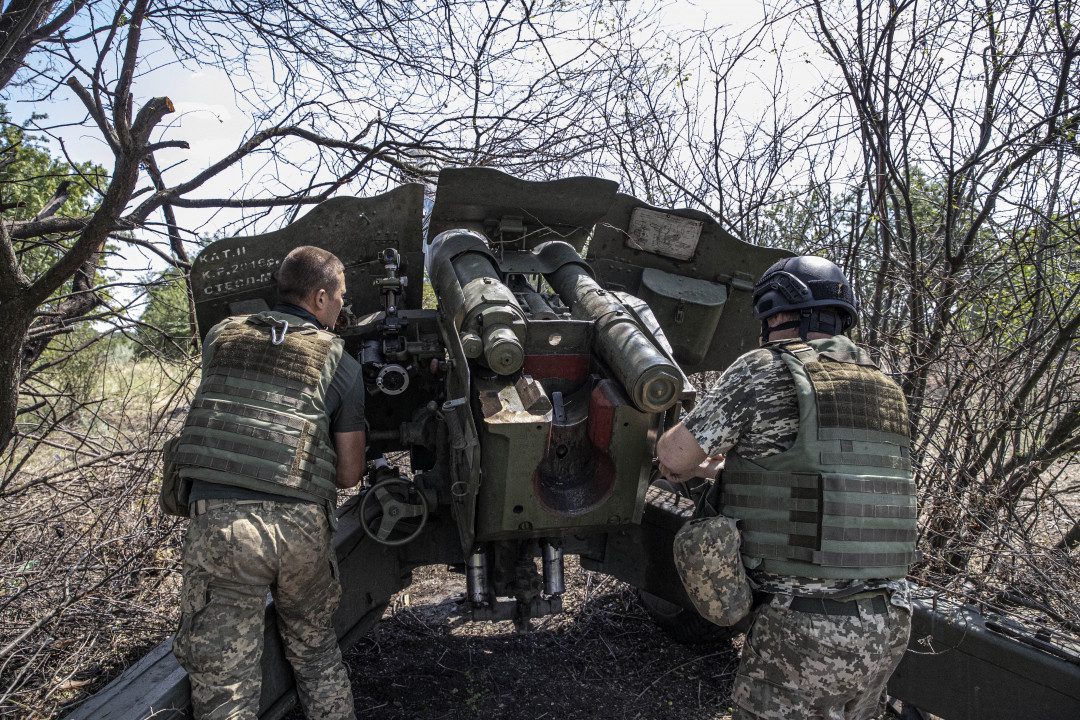 Podolyak: Negotiations with Russia are only possible after it suffers several defeats. Mykhailo Podolyak, head adviser to the President’s Office, told Le Figaro newspaper that Russia is currently unable to seize more Ukrainian territories, so it inflicts damage on Ukraine’s civilian infrastructure. “It is necessary to understand that the negotiation process with Russia is possible only under the condition of several important (Russian) tactical defeats,” he said.

Energoatom: Shelling may cause blackout at nuclear plant, jeopardize nuclear fuel. Petro Kotin, president of Ukraine’s nuclear power monopoly Energoatom, said that the Russian-controlled Zaporizhzhia Nuclear Power Plant in the city of Enerhodar in Zaporizhzhia Oblast is connected to Ukraine’s grid via one transmission line. If the line is damaged by Russian shelling, the plant will go into blackout mode, which will jeopardize the safety of nuclear fuel, he added. Russia has been constantly shelling Ukrainian positions from Enerhodar and accused Ukraine of shelling the nuclear plant. Ukrainian authorities say that the plant has been shelled by Russia.

Zelensky calls on West to ban Russian travelers if Russia annexes more Ukrainian territory. President Volodymyr Zelensky said in an interview with the Washington Post that closing the borders for Russian travelers is “the most important sanction.” “Don’t you want this isolation?” Zelensky said, addressing the Russians. “You’re telling the whole world that it must live by your rules. Then go and live there. This is the only way to influence Putin.”

Ukraine’s Education Ministry and University of Cambridge sign agreement to streamline Ukrainian students’ transition to school abroad. A memorandum of understanding was signed on Aug. 8 between the institutions and aims at creating streamlined study maps to help teachers in countries hosting Ukrainian students to objectively assess the students’ level of education. The agreement will also help register the students’ learning results, so once the students return to Ukraine, their teachers will understand what they learnt while abroad.

Ukrinform: First group of wounded Ukrainians arrive in Latvia for treatment. Twenty one seriously injured Ukrainians from active war zones have arrived at the Riga Eastern Clinical University Hospital on Aug. 8. Most of the patients are young and enduring injuries from shelling or explosions, says a hospital official. Latvia’s Health Minister said that the country is ready to receive hundreds more victims of Russia’s invasion of Ukraine.

Russia unilaterally halts US inspections of its nukes under New START treaty. The New START (Strategic Arms Reduction Treaty) was signed in 2010 and is expected to last until 2026. The treaty provides for 18 on-site inspections per year for U.S. and Russian nuclear arsenals.

Large numbers of Russian forces have been streaming into southern Ukraine over the past several weeks, centered around Kherson Oblast, where Ukraine is expected to be conducting a counter-offensive, per President Volodymyr Zelensky’s order to liberate the south. Analysts estimate that over a third of Russia’s fighting forces in Ukraine have been committed to the area. Read our story on how Russia masses forces in south ahead of counterattack here.

In its report, Amnesty International alleges that Ukraine’s military tactics “violate international humanitarian law and endanger civilians, as they turn civilian objects into military targets.” It goes without saying that both sides in a war, even the one being brutally invaded by its neighbor, must respect the laws of war and do everything to protect civilians. Instead of calling on all sides to protect the lives of civilians, Amnesty International chose to run an irresponsible and dangerous report, titling it “Ukrainian fighting tactics endanger civilians,” and overtly blaming Ukraine for the endangerment of innocent lives in the country. Read our editorial on the recent report here.

Finnish PM: ‘It’s unfair that Russians can travel to EU despite brutal war in Ukraine.’ Finnish Prime Minister Sanna Marin said she believes issuing tourist visas to Russians should be restricted following the country’s invasion of Ukraine. “It’s not right that while Russia is waging an aggressive, brutal war of aggression in Europe, Russians can live a normal life, travel around Europe,” she said.

US confirms it provided Ukraine with anti-radar missiles. Colin Kahl, U.S. Under Secretary of Defense for Policy, confirmed on Aug. 8 that American authorities have transferred unspecified “anti-radiation missiles” to the Ukrainian Armed Forces. This is the first time the Pentagon announced the specific provision of such weapons to Ukraine. The missiles can be launched from Ukraine’s existing aircraft. These ASMs (air-to-surface missiles) are typically fired from the air at targets on the ground, though in some cases, they can also be fired at other aircraft. They home in ground-based radar stations used to direct surface-to-air missiles at detected enemy aircraft.

Ambassador: Turkey’s Baykar to build drone factory in Ukraine. The Turkish company that produces Bayraktar combat drones, is currently in the process of building a factory in Ukraine, said Ukrainian Ambassador to Turkey Vasyl Bodnar. According to Bodnar, Baykar has already registered in Ukraine, developed project documents and purchased a land plot. In July, Turkish President Recep Tayyip Erdogan reportedly said that Russian dictator Vladimir Putin asked him for a deal with the Turkish defense firm. Baykar’s CEO Haluk Bayraktar earlier said his company wouldn’t sell the drones to Russia. “Turkey supports Ukraine with combat drones. We would never do that,” he said.

Germany rules out launching Nord Stream 2. “We face difficult months ahead, but it is clear that we stand firmly on the side of Ukraine, and we stand behind the sanctions that we agreed together with the European Union and the international community,” German Chancellor Olaf Scholz said on Aug. 8.

US to provide $4.5 billion to fund Ukraine’s budget. The funds will be allocated in tranches, beginning with a $3 billion disbursement in August, the United States Agency for International Development (USAID) said.

Financial Times: West considers sanctions against Turkey due to its cooperation with Russia. According to sources cited by the Financial Times, the West is increasingly alarmed at the deepening ties between Turkish President Recep Tayyip Erdogan and Russian dictator Vladimir Putin. Erdogan and Putin agreed to boost economic ties at a meeting in Sochi on Aug. 5. The Washington Post reported earlier that Russia wanted Turkey to help it bypass the sanctions imposed due to its aggression against Ukraine.