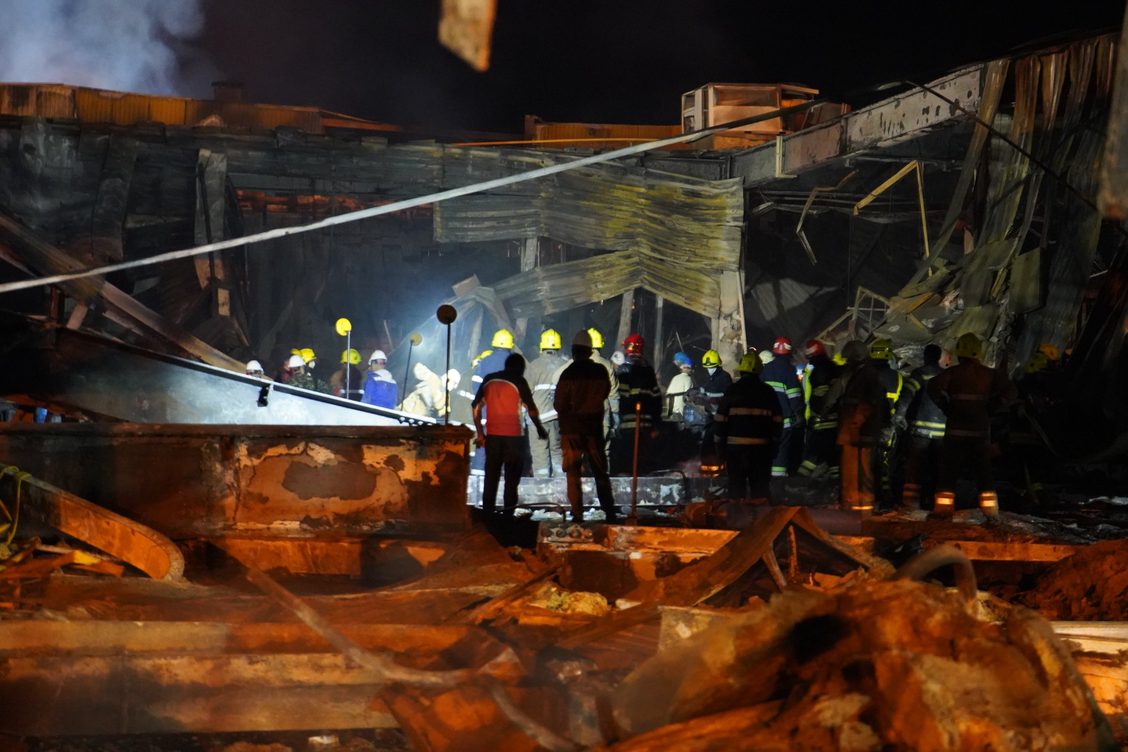 Firefighters work at the site of a Russian missile strike that hit a shopping mall in Kremenchuk, Poltava Oblast, on June 27. (State Emergency Service of Ukraine/Telegram)

Institute for the Study of War: Russia relying on retired officers and reserve forces due to heavy losses. The U.S. think tank said in its latest assessment that Russian military authorities continue to seek ways to replenish their increasingly exhausted force capabilities without announcing general mobilization. The experts quote the U.S. and U.K. intelligence which suggests that Russia is relying on retired officers and will need to start mobilizing reservists to sustain its eastern offensive as its military casualties continue to mount. The institute has previously assessed that such reserves are unlikely to provide Russian forces with meaningful regeneration of force capabilities.

Le Monde: Zelensky asks G7 to help end war this year. In a video address to G7 leaders, President Volodymyr Zelensky urged world leaders “to do their maximum” to end the war by year’s end, including by intensifying sanctions against Russia, French newspaper Le Monde reported.

Forbes: Russian missiles launched over weekend in Ukraine worth up to $220 million. Forbes Ukraine reported that Russian forces launched 60 to 80 long-range missiles on June 25-26, which could cost Russia between $150 million and $220 million. The report estimates that the missile strikes that hit a residential building and kindergarten in Kyiv on June 26 could cost Russia between $50 to $80 million.

Intelligence: More missiles will be launched from Belarus in future. Ukraine’s General Staff reported on June 27 that airstrikes and missile attacks from Belarus are expected to continue, while Kyiv is closely observing the movements of units of the Armed Forces of Belarus.

Explosions reported in Mykolaiv. Mykolaiv Mayor Oleksandr Sienkevych said explosions were heard in the city early on June 28. The air raid alert began sounding in Mykolaiv at 5 a.m. local time. Sienkevych also reported that Russia used the Uragan multiple rocket launcher to fire at the city late on June 27. There are currently no reported casualties, however, several residential buildings and a car were damaged. The mayor added that some cluster munition fragments were found near a public transport stop.

219 men served notes of conscription while clubbing. During a raid, Kyiv police discovered two nightclubs violating curfew. 413 people were identified. Among them, the military commissioner checked men of conscription age for their military status. As a result, 219 men were handed summonses to the military registration and enlistment office, the Kyiv Police Department reported.

Akhmetov files lawsuit against Russia. Ukraine’s richest oligarch Rinat Akhmetov said on June 27 that he filed a lawsuit at the European Court of Human Rights against Russia for gross violations of his property rights. Akhmetov is asking for “billions of dollars” to compensate for the blockade, looting, destruction, and theft of his grain and metal from Ukraine to Russia.

UN: 10,631 civilian casualties as a result of Russia’s war. The UN High Commissioner for Human Rights confirmed 4,731 deaths and 5,900 injuries of civilians in Ukraine since Russia’s full-scale invasion began on Feb. 24. At least 330 children were killed and 489 injured. The actual figures may be much higher because information from some places where intense hostilities are taking place is delayed, and many reports of civilian casualties still need to be confirmed.

Russian shelling kills civilians in Kharkiv. Ukraine’s Prosecutor’s Office reports that four civilians were killed and 18 injured on June 27 as a result of Russia’s shelling of residential areas of the city.

Biden: Russia to be held accountable for attack on civilians at shopping mall. U.S. President Joe Biden reacted to Russia’s bombing of the Kremenchuk shopping mall which left dozens dead and many more injured, with the toll still increasing. “Russia’s attack on civilians at a shopping mall is cruel. We stand in solidarity with the Ukrainian people,” he said. Biden reiterated that the U.S. and its allies stand with Ukraine and that Russia will be held accountable for such atrocities.

Johnson: Missile attack on Kremenchuk shopping mall once again shows Putin’s ‘depth of cruelty and barbarism.’ In a statement at the G7 gathering of world leaders in Munich, U.K. Prime Minister Boris Johnson said that Russian dictator Vladimir Putin “must realize that his behavior will do nothing but strengthen the resolve of the U.K. and every other G7 country to stand by Ukraine for as long as it takes.” “Our thoughts are with the families of the innocent victims of Ukraine,” he added.

US to announce handing over air defense systems to Ukraine. “I can confirm that we are, in fact, in the process of finalizing a package that includes advanced air defense capabilities,” U.S. National Security Advisor Jake Sullivan said.

Bayraktar says it will donate drones Ukrainians wanted to buy after crowdfunding. After Serhiy Prytula, a Ukrainian comedian, politician, and volunteer, organized crowdfunding where he raised over $20 million in three days to buy Bayraktar drones for Ukraine’s army, the manufacturer refused to take the money, offering three drones instead for free. “We ask that raised funds be remitted instead to the struggling people of Ukraine. We are touched by their solidarity and resolve in the face of seemingly insurmountable challenges,” the company’s statement reads.

Turkey announces establishment of operational center in Istanbul to export grain from Ukraine. Turkish Presidential Communications Director Fahrettin Altun told Italian newspaper Il Messaggero that “as a result of our negotiations, a consensus was achieved” to establish the center, and Istanbul hopes that ships loaded with Ukrainian grain will depart “as soon as possible.” Russia is blocking from export 20 million tons of grain in the Ukrainian ports.

NATO to enhance battlegroups on eastern flank due to Russian threat. NATO Secretary-General Jens Stoltenberg announced during a press conference, that NATO will expand its battlegroups on the eastern flank up to brigades, due to the threat of Russia. “At the Summit, we will strengthen our forward defenses. We will transform the NATO Response Force, and increase the number of our high readiness forces to well over 300,000. We will also boost our ability to reinforce in crisis and conflict,“ Stoltenberg said.

EU provides Ukraine with equipment to protect against chemical, nuclear threats. The equipment provided by the EU includes 300,000 specialized protective suits, 5,600 liters of decontaminants, and 850 units of equipment for decontamination operations, with a total cost of $12 million. This aid will be delivered to Ukraine from EU emergency stocks stored in Romania, Hungary, Sweden, Germany, Greece, and Denmark.

Russian hackers target Lithuania for the country’s restriction on transit to Kaliningrad. Russian hacker group “Killnet” conducted a massive cyberattack on Lithuanian government websites and companies. According to a statement published by “Killnet,” the goal was to force Lithuania to “immediately revoke its decision to ban the transit of Russian goods from the Kaliningrad region to Russia.” According to Lithuanian TV channel TV3, the cyberattacks hit the ministries of foreign affairs, internal affairs, defense, justice, as well as the State Tax Inspectorate of Lithuania.