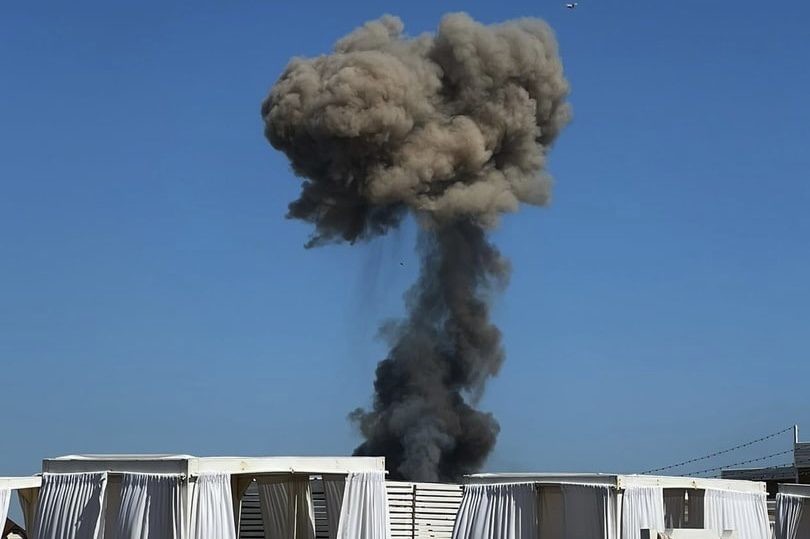 A series of explosions were reported at a Russian military base in Ukraine’s Russian-occupied Crimea on Aug. 9, 2022. (Courtesy)

US official: Negotiations with Putin won’t work. Kurt Volker, former U.S. Special Representative for Ukraine negotiations, told Radio Free Europe/Radio Liberty that he doesn’t believe that there will be any results from negotiation attempts with Russian dictator Vladimir Putin. Volker, who also served as the U.S. Ambassador to NATO, said that Putin has already made up his mind to destroy Ukraine as a sovereign state and destroy its people and he won’t stop as long as he has this “imperialist mindset.” Volker added that Putin is in “an increasingly weak position” due to Moscow’s failure to capture Ukraine despite the high number of casualties.

Danilov: Russia lacks collaborators, resources to stage referendums in occupied territories. Oleksiy Danilov, secretary of the National Security and Defence Council, said that Russian-appointed proxies cannot form “governing bodies” and holding any type of referendums is only possible in the “fake news mode.”

Official: Over 1.3 million people have been evacuated from Donetsk Oblast since Feb. 24. According to Kyrylo Tymoshenko, deputy head of the President’s Office, around 350,000 people, including 50,000 children, still remain in Ukrainian-controlled parts of Donetsk Oblast. Over the past six days, over 3,000 civilians, including 600 children, have been evacuated as part of the mandatory evacuation announced by the government.

Russia’s budget surplus nears $170 billion in six months, despite Western sanctions. According to Russia’s Central Bank, the country’s budget surplus has tripled compared to the same period in 2021. Two key reasons led to this – record high energy prices, primarily for Russia’s key exports, gas and oil, and a sharp decline in the country’s imports due to Western sanctions.

Russian spy sentenced to 15 years in prison. The Kyiv Oblast Prosecutor’s Office said on Aug. 9 that a resident of Kyiv Oblast had been convicted of treason committed under martial law. According to the investigation, the convict exposed the locations of territorial defense checkpoints, as well as provided other sensitive information about law enforcement officers and servicemen of the Armed Forces of Ukraine.

Ministry: 2 more ships leave port of Chornomorsk. According to the Infrastructure Ministry, the ships carry almost 70,000 tons of agricultural products. One of them is heading to Turkey, and the other one’s destination is South Korea. The ministry seeks to enable the ports to process at least 100 ships per month.

Poll: 52% of Russians support continuing war against Ukraine. According to a new poll by the Russian Field sociological agency, 38% of respondents were in favor of moving to peace talks with Ukraine. The survey also showed that 65% of Russians would support a peace treaty with Ukraine if Russian President Vladimir Putin announced it. At the same time, 60% would support a new attack on Kyiv if Putin decided that. The authors of the study warned that its results may not show the real situation, since the fear to talk about the war has increased among Russians.

Multiple explosions reported at Russian military airbase in occupied Crimea. A series of loud blasts were heard from the direction of a Russian military airbase in the western part of occupied Crimea in late afternoon on Aug. 9, according to multiple media reports. Shortly after the explosions took place, videos of black smoke rising above what is believed to be Russia’s Saki Air Base in Novofedorivka captured from a nearby beach began appearing on the internet.

Russia’s proxies in Crimea claim that 3 people injured by explosions at Saki airfield. The Russian-controlled emergency service in Crimea said that three people were injured due to explosions at the Saki Air Base in Novofedorivka. Earlier on Aug. 9, local residents told Ukrainska Pravda that explosions were heard from the airfield. Russian Defense Ministry said that the blasts occurred due to the detonation of munitions. Ukraine hasn’t yet commented.

Kremlin claims explosions in Crimean airfield caused by munitions detonation. Following reports of explosions in Russian-occupied Crimea, Russian Defense Ministry said that the blasts on the territory of the Saki Air Base occurred due to the detonation of several munitions at a bunded storage area. Local residents earlier told Ukrainska Pravda that explosions were heard from the airfield in Novofedorivka, located in the western part of the peninsula. Ukraine hasn’t yet commented.

Zelensky: The war must end with the liberation of Crimea. In his nightly address, President Volodymyr Zelensky said that the Russian war against Ukraine began with the occupation of Crimea and must end with its liberation. “Russia has turned our peninsula, which has always been and will be one of the best places in Europe, into one of the most dangerous places in Europe. Russia brought large-scale repression, environmental problems, economic hopelessness and war to Crimea.” Zelensky added that “it is impossible to say” when the liberation will happen, but Ukraine is constantly “adding the necessary components to the formula of liberation of Crimea.”

Nude photos are an art form with the power to raise money for the military. At least that is the philosophy behind the movement Teronlyfans, founded by Ukrainian artist Anastasiya Kuchmenko, 26, and Belarusian native Nastya Nasko, 23. Since the beginning of Russia’s full-scale invasion, nearly 40 volunteers, both male and female, have joined the movement, raising about $700,000 for the Ukrainian military. Read our story here.

Human rights activists estimate over 100,000 Ukrainians have been conscripted in occupied Donbas since mid-February. Forced conscription in the occupied territories is a war crime, experts say, calling it abduction. Pavlo, a 20-year-old man from Donetsk, was among those forcibly taken to fight on Russia’s side. Read our story here.

Governor: Victim injured by Russian missile strike in Uman dies in hospital. Cherkasy Oblast Governor Ihor Taburets reported on Aug. 9 that one of the two people who were injured a day earlier by fragments of a downed Russian missile had died in the hospital. The official added that the condition of the other victim is stable.

Ukraine returns back bodies of 17 fallen defenders. The Ministry for Reintegration of the Temporarily Occupied Territories made the announcement on Aug. 9. According to Deputy Prime Minister Iryna Vereshchuk, as of July 3, Ukraine has returned the bodies of more than 400 fallen defenders since the beginning of the full-scale war with Russia.

Ukraine holds burial ceremony for unidentified victims in Bucha. Ukrainian authorities reportedly held a funeral service for 15 bodies discovered in Bucha, Kyiv Oblast, on Aug. 9 four months after Russian troops withdrew from the area. “All the people who were shot and exhumed from the mass grave have torture marks on them,” Deputy Mayor Mykhailyna Skoryk told Reuters.

Estonia PM calls on EU to stop issuing visas to Russian citizens. Kaja Kallas, Estonia’s Prime Minister, called for the “end of tourism from Russia now” on Aug. 9. Visiting Europe is “a privilege, not a human right,” Kallas said. Estonian Foreign Minister Urmas Reinsalu earlier said that Tallinn was preparing proposals for the EU to stop issuing visas to Russians, calling it “morally wrong” that Russian tourists are traveling to Europe en masse, while Russia is killing children in Ukraine.

Minister: 39 wagons filled with Australian coal arrive in Ukraine. The coal was delivered to a Ukrainian thermal power plant run by the country’s state-owned company Centrenergo. In total, Ukraine expects to receive 79,000 tons of coal from Australia. This will contribute to the “reliable energy supply in Ukraine this heating season, the most difficult (one),” said Energy Minister German Galushchenko. As of August, Ukraine has already accumulated 1.8 million tons of coal out of the planned 2.5 million tons.

US to allocate additional $89 million for demining Ukraine. The U.S. State Department announced on Aug. 9 that U.S. funding will provide 100 demining teams and strengthen the Ukrainian government’s demining capacity. “These explosive hazards block access to fertile farmland, delay reconstruction efforts, prevent displaced communities from returning to their homes, and continue to kill and main innocent Ukrainian civilians,” the statement reads.