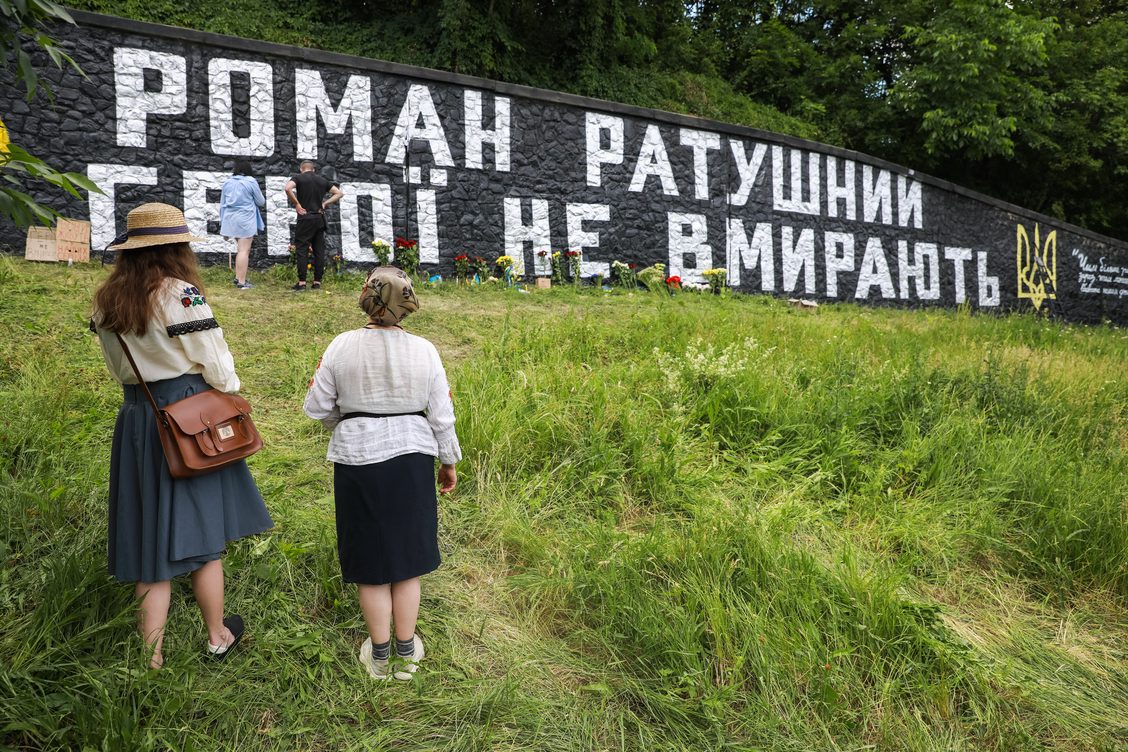 Zelensky on Ukraine’s EU candidate status: ‘It’s a victory.’ “Now, we will defeat the enemy, rebuild Ukraine, become an EU member state, and then – we will finally rest,” Zelensky said in a brief video address. In a written statement, he added: “EU candidate status for Ukraine doesn’t only benefit Ukraine. It’s the biggest step to strengthen Europe that can be taken now, when Russia’s war is testing our ability to stay free and united.”

Governor: Ukrainian military will have to retreat from Sievierodonetsk. Luhansk Oblast Governor Serhiy Haidai said on June 24 that Ukrainian forces will have to withdraw from destroyed city of Sievierodonetsk. “That is something we’ve been talking about. Do not spread rumors of betrayal. Nobody abandons our guys, nobody allows the encirclement (of our troops). The situation right now is as such that staying at these destroyed positions just for the sake of being there doesn’t make sense,” Gaidai said. At least 90% of the city’s infrastructure has been destroyed.

US-made HIMARS arrive in Ukraine. Ukrainian Defense Minister Oleksii Reznikov announced on Twitter on June 23 that the HIMARS multiple rocket launcher systems had arrived in Ukraine, without specifying the number. The HIMARS were part of a $1 billion U.S. military aid package to Ukraine announced on June 15. “Summer will be hot for Russian occupiers. And the last one for some of them,” Reznikov wrote.

Ukraine to begin first trial of Russian soldier accused of rape. Mikhail Romanov, 32, is accused of murdering a civilian man in the Kyiv region on March 9 and then repeatedly raping the man’s wife. A preliminary hearing in the country’s first such trial is expected on June 23 and the man will be tried in absentia as he is not in Ukraine. A prosecutor told Reuters that up to 50 such crimes were currently being investigated, but that the number of cases was likely to be higher.

Russia’s invasion causes over $6 billion worth of environmental damage. Russia’s war in Ukraine has led to more than 250 cases of ecocide and more than 2,000 cases of environmental damage, according to Minister of Environment and Natural Resources Ruslan Strilets. “The war has created more than 200,000 tons of hazardous waste and scrap metal, while every destroyed house represents 50 cubic meters of destruction waste,” he said.

Intelligence: Russian proxies to hold staged referendums to proclaim ‘republics’ in occupied parts of Kherson, Zaporizhzhia oblasts on Sept. 11. Ukrainian military’s Center for National Resistance said in its report that the date of the staged referendums in occupied territories of these regions was chosen to coincide with the single voting day in Russia.

City Council: Russian-occupied Mariupol flooded with mountains of unsorted garbage. Mariupol Mayor Vadym Boychenko said that the bombed-out city is “on the verge of an epidemiological catastrophe” where infectious diseases are already spreading, and deadly infections such as cholera and dysentery could be among them. Mariupol City Council reported that 9,000 tons of garbage flooded the streets, and Mariupol is now “a real ghetto” where unsanitary conditions are jeopardizing the lives of its remaining residents.

Institute for the Study of War: Russian offensive operations likely stall in Donbas in the coming weeks. The U.S. think tank said in its latest assessment on June 23 that Russian forces have made substantial gains in the Sievierodonetsk-Lysychansk area over the last several days and Ukrainian troops continue to suffer high casualties, but Ukrainian forces have fundamentally accomplished their objective in the battle by slowing down and degrading Russian troops. The experts predict that Russian offensive operations will likely stall in the coming weeks, whether or not Russian forces capture the Sievierodonetsk-Lysychansk area, likely granting Ukrainian forces the opportunity to launch prudent counteroffensives.

European leaders granted Ukraine candidate status on June 23, in a historic step on the long and difficult path to EU membership for the war-torn country. Read our story here.

Russian forces captured the villages of Loskutivka and Rai-Oleksandrivka, south of the city of Lysychansk, Luhansk Oblast, Ukraine’s General Staff reported on June 23. Russian troops are reportedly pushing to encircle Ukrainian positions in the villages of Zolote and Hirske, also located south of Lysychansk. Read our story here.

A Russian oil refinery formerly owned by Medvedchuk’s wife is ablaze in the Rostov region. Read our story here.

Disinformation has been part of Russia’s geopolitical strategy since the establishment of the Russian Imperial Police in 1881. How has Russia weaponized information, from the 1800s, through Soviet times, and all the way to today? Listen to our podcast here.

Roman Ratushnyi, 24, a prominent activist who fought illegal construction in Kyiv, joined the military when Russia began its all-out invasion of Ukraine. He was killed in Kharkiv Oblast on June 9. Now, a street in Kyiv is set to be renamed after him. Read our story here.

People’s Hero of Ukraine Andrii Verkhohliad killed in action. Major Andrii Verkhohliad, company leader with the 72nd Mechanized Brigade, was killed in action on June 23, according to a Facebook post by journalist Volodymyr Runets. Verkhohliad was a veteran of the war in Donbas, taking part in the battle for the city of Avdiivka in Jan. 2017, for which he was awarded the Order of Bohdan Khmelnytsky. As recognition for his leadership, he was promoted to a company leader in charge of over 100 soldiers.

UN: 10,403 civilian casualties in Ukraine as a result of Russia’s war. The UN’s human rights agency as of June 22 confirmed 4,662 deaths and 5,803 injuries to civilians in Ukraine since Russia’s full-scale invasion began on Feb. 24. At least 320 children were killed and 479 were injured. The actual figures may be much higher because information from some places where intense hostilities are taking place is delayed, and many reports of civilian casualties still need to be confirmed.

Czech Republic to stop issuing visas to Russians, Belarusians. The Czech government on June 23 adopted a proposal by the Ministry of Foreign Affairs shortly after Russia’s full-scale invasion of Ukraine to stop issuing visas to Russian and Belarusian citizens, except in humanitarian cases. The law will not apply to Belarusians and Russians who have residence permits in the Czech Republic, those with family members who are Czech or EU citizens, or “applicants whose stay is in the interest of the Czech Republic.” The law is set to expire in 2023.

Reuters: Nike to fully exit Russia. The brand confirmed in an emailed statement to Reuters on June 23 that it would leave the country completely after scaling down its operations. The U.S. sportswear brand earlier announced on March 3 that it would temporarily suspend operations over Russia’s war in Ukraine.

Russian schools might include war in Ukraine, annexation of Crimea into history curriculum. Russia’s RBC news website reported on June 22 that Russia’s Ministry of Education has prepared amendments to the general secondary education curriculum. According to it, schoolchildren will learn about Russia’s war against Ukraine, while other topics include the (according to Russia) revival of Russia as a world power and its illegal annexation of Ukraine’s Crimean peninsula.