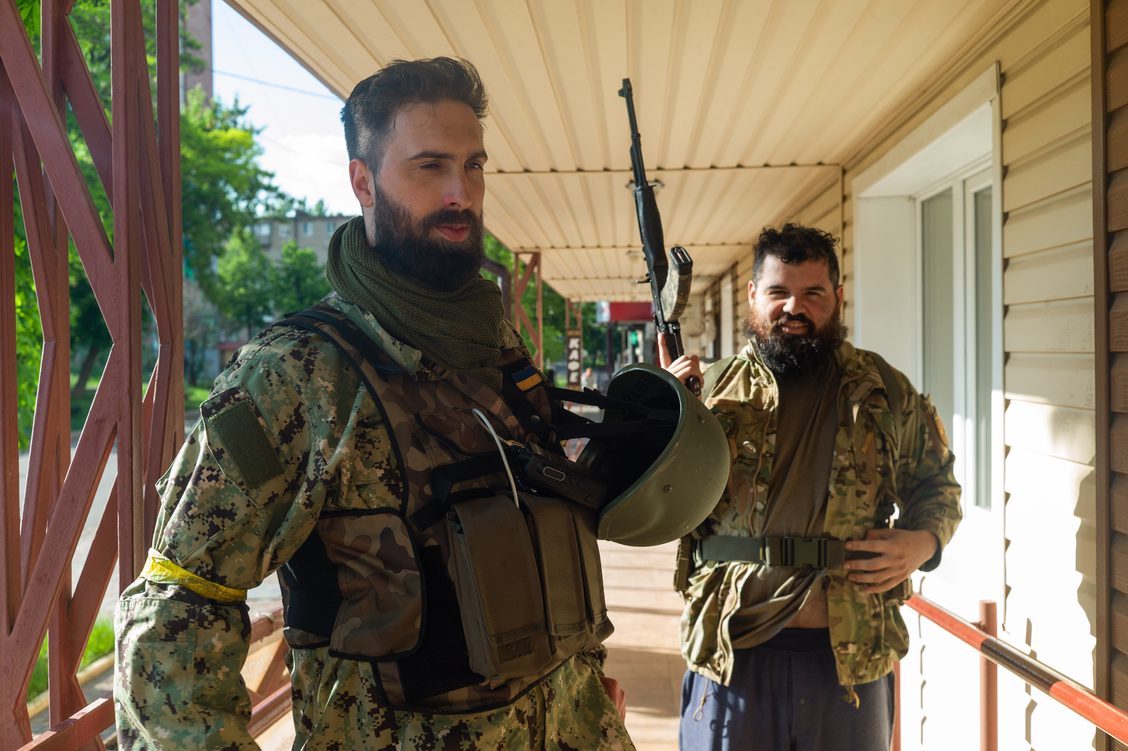 Two foreign fighters supporting Ukraine pose for a picture in Donetsk Oblast on May 26, 2022. (Kaoru Ng)

Russian MP threatens London with bombardment. Andrey Gurulyov, a member of the Russian parliament, said London will be the first city bombed by Russia should the blockade of Kaliningrad Oblast, a Russian exclave, lead to a war with NATO. “The first one to be hit will be London. It is crystal clear that the threat to the world comes from the Anglo-Saxons.” he said on Russian national TV. He also claimed that Russia would destroy NATO space satellites.

UN Chief: There’s real risk of multiple famines this year due to Russia’s war in Ukraine. UN Secretary-General Antonio Guterres said the world is facing an unprecedented global hunger crisis. “The war in Ukraine has compounded problems that have been brewing for years: climate disruption; the Covid-19 pandemic; the deeply unequal recovery,” he said. According to the Integrated Food Security Phase Classification the U.N. uses, millions of people in 37 countries are on the brink of famine due to Russia’s blockade of grain exports from Ukraine.

Ukraine’s intelligence: Russia plans to attack residential areas in Belarus to draw it into war against Ukraine. Russia reportedly plans to attack residential buildings in the Belarusian city of Mozyr to draw the country into Russia’s war against Ukraine. Russian troops, under the guise of civilians, have already arrived in the city. Up to seven Belarusian battalions are concentrated near the Ukrainian border as of June 21. Overall, the Belarusian army has about 60,000 troops.

Blinken: Russia has already lost the war. “Ukraine is defending itself with extraordinary courage and resilience and Russia has already lost,” U.S. Secretary of State Antony Blinken said. “President Putin’s objective, in his own words, was to eliminate Ukraine as a sovereign independent country. That effort has failed.”

Johnson: NATO, G7 shouldn’t pressure Ukraine into concessions to Russia. “My message to colleagues at the G7 and NATO, in particular, is going to be ‘now is not the time to settle and encourage the Ukrainians to settle for a bad peace, for a peace for which they are invited to give up chunks of their territory in return for a ceasefire,’“ U.K. Prime Minister Boris Johnson said during his visit to Rwanda. “I think that would be a disaster. It would be a trigger for further escalation by (Russian dictator Vladimir) Putin whenever he wanted,” he added.

Russian soldier to face trial on charges of torturing 9 hostages in Irpin. The suspect, alongside other Russian servicemen, took nine men hostage in the town of Irpin, Kyiv Oblast, in March, the Prosecutor General’s Office said. The prisoners were beaten with gun butts and given no food or water, the prosecutors said.

Security Service says Russia’s intelligence recruited Ukrainian MP Derkach. Ukraine’s Security Service said on June 24 that it exposed a network of Russian agents in Ukraine, which included Ukrainian lawmaker Andrii Derkach. According to law enforcement, Derkach received funds from the GRU to create private security structures that Russia planned to use to capture Ukraine. Russia allocated $3-4 million every few months for the purpose. Ukraine imposed sanctions against Derkach in 2021. The U.S. government has called Derkach “a Russian agent” and imposed sanctions against him in 2020, accusing him of trying to interfere in U.S. elections.

State Emergency Service: Ukraine may need 10 years to demine entire territory. “These are optimistic calculations because we do not yet know what is happening in the territories with ongoing hostilities,” said Oleksandr Khorunzhy, a spokesman for Ukraine’s State Emergency Service, on June 24. He added that pyrotechnics have already demined over 62,000 hectares of Ukrainian territory, neutralizing 45,000 explosives, including 2,000 aerial bombs.

Russian attacks on Mykolaiv Oblast wound 17 people in past 24 hours According to Hanna Zamazieieva, the head of the Mykolaiv Oblast Council, multiple settlements in the region came under fire on June 23. The attacks damaged residential buildings and other infrastructure, she said. She added that 266 injured civilians are currently being treated in the oblast’s hospitals.

Russian media: Russian collaborator’s car blown up in Russian-occupied Kherson. According to Russian state-controlled media, the car belongs to Dmytro Savluchenko, a local activist who worked with Russian forces in the city. It’s unclear whether he was in the car at the time of the explosion.

Ukraine’s leading anti-corruption watchdogs issued a statement on June 24 saying that the Ethics Council, the judicial reform’s main body, has undermined trust in the process by approving tainted candidates for top jobs and vetoing an anti-corruption crusader. Read our story here.

Ukrainian troops were ordered to withdraw from Sievierodonetsk, Luhansk Oblast Governor Serhiy Haidai said on June 24. The city has been the scene of fierce fighting for the past several months, with Russian troops controlling most of it. Read our story here.

Early on, Ukraine’s south became one of the hardest-hit regions of Russia’s full-scale invasion. Moving out of occupied Crimea, Russians sacked the southern regional capital of Kherson on March 2. Soon, they reached the outskirts of the major port city of Mykolaiv. Read our story here.

Ukrainians collect $20 million in 3 days to buy 4 Bayraktar drones for the army. “We even have a little money left. Enough for us to buy one more (Bayraktar),” Serhiy Prytula, a comedian turned politician, said on Facebook. Prytula, who initiated the Bayraktar donation campaign, runs a charity that helps the Ukrainian army.

Spiegel: Germany considers expropriating part of Nord Stream 2. According to German news outlet Spiegel, Germany’s Economy Ministry is investigating whether it’s possible to seize the part of the pipe system that is on German territory and cut it off from the rest of the pipeline. The expropriated tubes could then be connected to a new gas terminal.

Canada allows confiscation of Russian assets for reconstruction of Ukraine. A Canadian law that came into effect on June 23 allows the confiscation of assets subject to sanctions due to Russia’s war, and their subsequent use to support Ukraine. Canada has blocked assets worth $328 million due to the sanctions.

Dutch city to build temporary housing for nearly 800 Ukrainian refugees. The city of Vlaardingen will construct 409 homes, equipped with all necessities, for up to 762 people, reports Dutch media Nederlandse Omroep Stichting. The homes will reportedly be constructed in three to five years.

Ukraine, France to cooperate on investigation of Russian war crimes. Prosecutor General Iryna Venediktova signed an agreement on June 24 with various departments within the French government to provide mutual legal assistance regarding Russian crimes against humanity, war crimes, and genocide in Ukraine.

Scientist says at least 3,000 dolphins have died in Black Sea since start of Russia’s full-scale invasion. Ivan Rusiev, an environmental scientist at the Tuzlivski Estuaries National Park, said that increased ship noise, explosions, and the use of powerful sonar systems may be disorienting dolphins, which use echolocation to navigate. Unable to find food, they die of starvation.