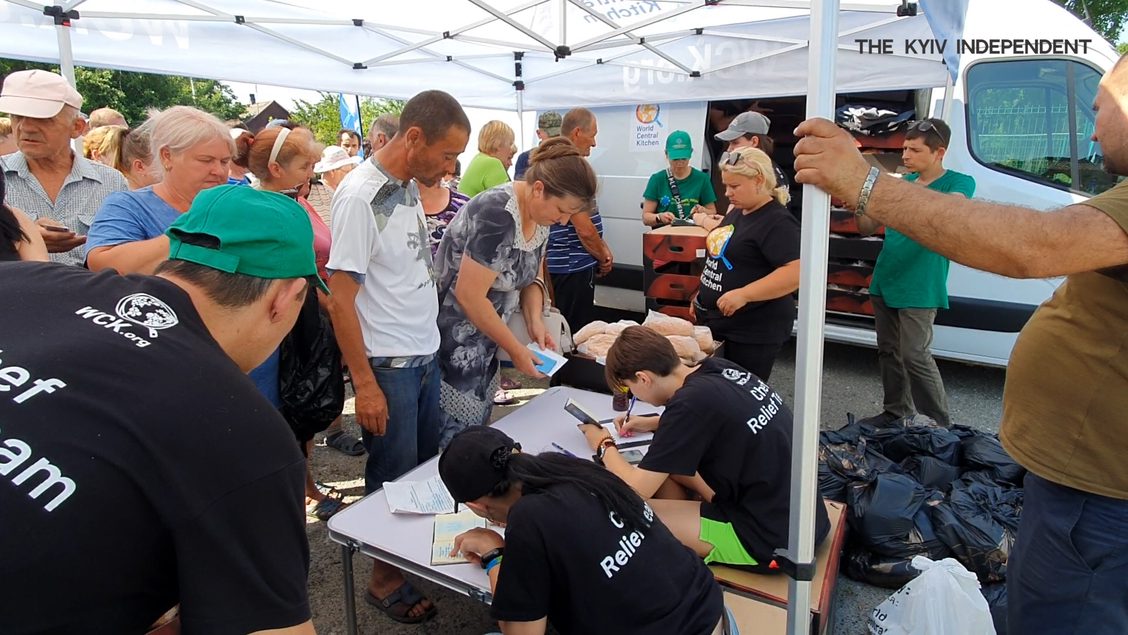 Residents of the village of Iverske line up to receive humanitarian aid from Vse Bude Dobre and its donor, World Central Kitchen, on June 11, 2022. (The Kyiv Independent)

Johnson: Russia’s war momentum in Ukraine may slow down. British Prime Minister Boris Johnson said that in the next few months “Russia could come to a point at which there is no longer any forward momentum” because the Kremlin’s offensive in the Donbas has exhausted the Russian army. “We must help the Ukrainians to reverse the dynamic,” he said.

Mayor: Russian troops kidnap people in Energodar en masse. The situation with the kidnappings of residents and nuclear plant employees is becoming “catastrophic,“ according to Dmytro Orlov, the mayor of the Russian-occupied city of Energodar in Zaporizhzhia Oblast. Some people have been tortured and abused, he added.

German chancellor opposes ‘dictated peace’ for Ukraine.“Ukraine - and only Ukraine - decides what is right for them,” German Chancellor Olaf Scholz wrote on Twitter on June 22. “Nothing about Ukraine without Ukraine! We are a long way from negotiations because Putin believes in a dictated peace… The EU, NATO and G7 must send the message that the world’s democracies stand together in the fight against Putin’s imperialism.

Mariupol Mayor: Russians are forcing all locals returning to Mariupol to go through ‘filtration.’ According to Mariupol Mayor Vadym Boychenko, Russians force people entering the occupied city to undergo an interrogation procedure, which may lead to torture and kidnapping. “They are afraid that the Armed Forces will enter and that there will be a guerrilla war,” he said during a briefing.

Intelligence chief: Russian collaborator’s car blown up in Kherson Oblast. According to Kyrylo Budanov, head of Ukraine’s military intelligence, there is currently no information on the condition of Oleksiy Kovalyov, whose car was blown up on June 22. Kovalyov, a member of parliament from President Volodymyr Zelensky’s party, said on Facebook on June 8 that he was cooperating with Russian troops in Kherson Oblast.

Zelensky: ‘Liberating our land as quickly as possible is our national goal.’ In his nightly address on June 22, the date of Nazi Germany’s attack on the Soviet Union in 1941, President Volodymyr Zelensky said that Ukraine aims to defeat Russian troops quicker than in the 1,418 days it took to end World War II.

Governor: Ukraine controls nearly 45% of Donetsk Oblast. Donetsk Oblast Governor Pavlo Kyrylenko said in a comment to Radio Free Europe/Radio Liberty on June 22 that Ukraine remains in control of nearly half of the heavily damaged Donetsk region. Russia and its proxies currently hold the remaining 55%, including destroyed cities of Mariupol and Volnovakha.

Institute for the Study of War: Russian troops advance on Lysychansk, likely to reach it in several days. The U.S. think tank said in its latest assessment that despite Russia’s measured gains south of Lysychansk on June 22, Russian forces are unlikely to quickly gain full control of the Sievierodonetsk-Lysychansk area. Russian forces also continued street fighting within Sievierodonetsk, presumably for control of the industrial zone.

Study: Russia employs large scale cyber attack efforts to bolster invasion, many failed. A new study published by Microsoft on June 22 suggested that while much of Russia’s recent cyberactivity has focused on Ukraine, at least 128 network intrusions have been detected in 42 countries. Only 37 of those (29%) managed to successfully penetrate a network, Microsoft said. They added that among the successful penetrations, only a quarter (nine out of the 128 attempted attacks) resulted in data being stolen.

As the largest war on European soil since World War II rages on the EU’s eastern border, the winds of change are blowing within European institutions, who have now recommended Ukraine’s membership and promised to expedite Ukraine’s application. As Ukraine is set to receive EU candidate status, when is membership coming? Read our story here.

As Russian forces push across the Donbas, trying to capture all of Donetsk and Luhansk oblasts, many civilians have been forced to leave. Yet many have nowhere to go, and they remain in their cities, towns and villages. Humanitarian aid, provided by local authorities and volunteers, is what’s keeping many villagers afloat. Read our dispatch on how Ukrainian volunteers keep Donbas running through its darkest hours here.

Prosecutors: Russia’s war has killed at least 324 children in Ukraine since Feb. 24. More than 592 children have been injured, Prosecutor General’s Office said on June 22. The figures are expected to be higher since they do not include casualties in areas where hostilities are ongoing and in Russian-occupied areas, the prosecutors said.

Five women killed in Russian mortar attack on village of Pryshyb, Kharkiv Oblast. Stepan Maselsky, head of the Izyum district administration, told Suspilne television that Russian troops had shelled the women at the entrance to a multi-story residential building.

Reporters Without Borders: Ukrainian photojournalist Maks Levin executed by Russian troops, possibly after being interrogated, tortured. Reporters Without Borders published a report following their investigation into the killing of Levin, who was found dead in Kyiv Oblast on April 1, along with his friend, Ukrainian soldier Oleksiy Chernyshov. According to the report, both were executed “in cold blood” by Russian forces, likely after being questioned and tortured on March 13, the day they went missing.

European Commission chief urges EU leaders to give Ukraine candidate status. Ursula von der Leyen called on the bloc’s leaders on June 22 to “make the right choice” amid Russian dictator Vladimir Putin’s aggressive war and “the wind of change” that is blowing over Europe again. The European Commission recommended giving candidate status to Ukraine on June 17, and the European Council is set to decide on Ukraine’s application on June 23.

EU to switch to coal to replace Russian gas. Elina Bardram, head of International Relations at the European Commission’s Directorate for Climate Action, said the use of coal in the European Union does not mean giving up on a long-term commitment to climate change.

Finnish defense chief: Finland is ready to fight Russia if attacked. According to Chief of Defense General Timo Kivinen, Finland is prepared for the type of warfare that is being waged in Ukraine.

Scholz promises further German support to Ukraine. German Chancellor Olaf Scholz said on June 22 that Germany would continue to support Ukraine “massively – financially, economically, humanitarian, politically and not least with the delivery of weapons.” Scholz also promised Ukraine a “Marshall plan” of long-term support for reconstruction after Russia’s war. “Ukraine has every right to defend itself against Russia,” Scholz said in his address to the Bundestag.

UK official: It will take years to replace stockpile of weapons sent to Ukraine. Tony Radakin, the UK’s chief of the defense staff, said that it would take five to ten years before the UK could reach pre-war figures. The country actively supports Ukraine, sending anti-tank missiles, armored vehicles, and surface-to-air missiles.

Miami police launches buy-back of weapons, will hand them over to Ukraine’s Armed Forces. Police have offered $50 for pistols, $100 for shotguns, and $150 for “powerful” rifles such as the AK-47 or AR-15. Police said they did not question the origins of the weapons. According to Miami Police Chief Manuel Morales, police have collected 68 weapons, although only some of them are probably suitable for sending to Ukraine.

Pew Research Center: Perception of Putin lowest in 20 years. The Pew Research Center, a U.S. think tank, said in its latest report published on June 22 that only 9% of respondents have confidence in Russia’s dictator Vladimir Putin “to do the right thing in world affairs.” Across 18 polled nations, a median of 90% say they do not have confidence in Putin. At the same time, median of 85% across 18 countries express an unfavorable opinion of Russia, with majorities in most nations saying they have a very unfavorable opinion of the country.