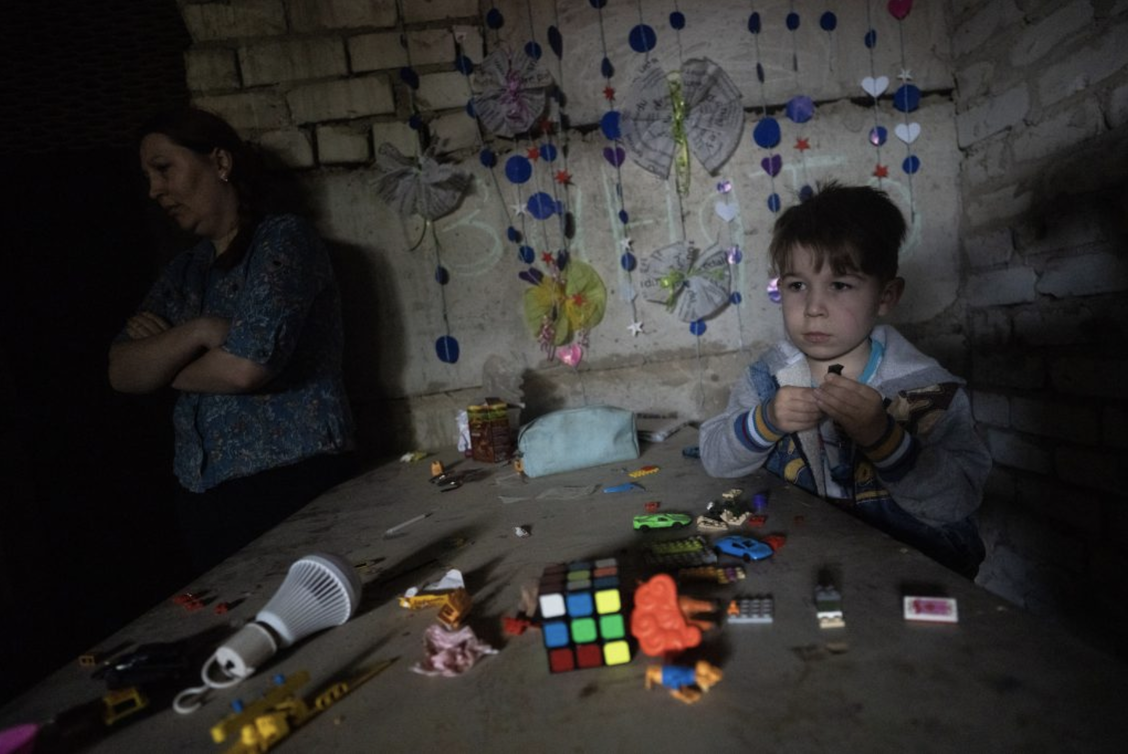 A child playing on his own in a basement in Lysychansk, Luhansk Oblast on May 26, hiding under indiscriminate Russian bombardment. (Kaoru Ng)

Luhansk Oblast governor: Ukrainian troops only control Azot plant in Sievierodonetsk. Serhiy Haidai said on June 20 that fierce fighting was now concentrated in the industrial area of Sievierodonetsk. He added there was an “extremely difficult” situation along the entire front line in Luhansk Oblast. According to Haidai, Russia has started a “large-scale offensive in the region.”

Russian forces launch 14 missile strikes on Ukraine’s south in 3 hours; no casualties reported. According to the Ukrainian military, the attacks hit Ochakiv, a town in Mykolaiv Oblast, the arm of the Danube River, as well as the town of Bilhorod-Dnistrovskyi in Odesa Oblast and Odesa itself. As a result of the attack, a food warehouse in Odesa burned down, Odesa authorities reported.

Russian officials claim Ukraine’s Armed Forces strike Ukrainian drilling rigs Russia seized in Black Sea. Russian officials in the occupied Crimea claimed that on June 20 Ukrainian forces launched a missile at the oil drilling rigs of Ukraine’s Chornomornaftogaz enterprise, a subsidiary of Ukraine’s state-owned oil and gas company Naftogaz. The rigs were seized by Russia after the Crimea annexation in 2014.

Minister urges residents to leave occupied Kherson Oblast ahead of counteroffensive. Deputy Prime Minister Iryna Vereshchuk said that people can try to leave the region through the occupied Crimea to Russia, as this is nearly the only way to escape. After that, they can enter the EU or other countries, where they will be assisted by Ukrainian embassies. This will minimize the number of casualties during future hostilities.

More than half of humanitarian corridors have failed to open due to violations by Russia. Deputy Prime Minister Iryna Vereshchuk said that out of the 350 corridors Ukraine tried to open to evacuate civilians only 165 successfully operated. Vereshchuk said that Russia used civilians as a human shield, “constantly violated its obligations, and did not fulfill its promises to the International Committee of the Red Cross.”

Melitopol mayor: 90% of occupied city’s school workers refuse to cooperate with Russian invaders. Ivan Fedorov said that only one-tenth of the total 2,700 employees agreed to do so. The invaders began to recruit their own teachers from Russia, he added.

Zelensky sees no progress in talks on grain export corridors. In his speech to the African Union, President Volodymyr Zelensky said that Africa “is held hostage by those who started the war against Ukraine.” As a result of Russia’s Black Sea blockade, Ukraine cannot export 25 million tons of grain. “The food crisis in the world will continue as long as this colonial war continues and our ports are blocked,” Zelensky said.

Mayor: Over 100,000 residents remaining in occupied Mariupol don’t have access to drinking water. According to Mariupol Mayor Vadym Boychenko, Russian occupiers provide Mariupol residents with drinking water once a week, while to get water people should wait in lines for 4-8 hours. There is no gas or electricity access; access to food is also limited. The sewage system isn’t working, according to Boychenko. He also called for humanitarian corridors to save people.

Deputy Prime Minister: More than 1,500 Ukrainian civilians held in Russian prisons. Russia is holding more than 1,500 Ukrainian civilians in prisons, Ukraine’s Deputy Prime Minister Iryna Vereshchuk said during a briefing on June 20. “They are in Rostov, Kursk, they are in jail, they are being held as prisoners of war, although they should not be,” she said, adding that among the imprisoned civilians are Ukrainian priests, volunteers, activists, journalists, and heads of local government agencies.

Institute for the Study of War: Coming week will be decisive in battle of Sievierodonetsk. The U.S. think tank cited Ukrainian officials in its latest assessment on June 20 by saying that Russian forces and equipment will be focused in the area to make a final push on the city, most of which is under Russian control except for the Azot chemical plant where fighting continues. Russian authorities also continue to struggle with consolidating control of occupied territories in the face of persistent Ukrainian partisan pressure.

75 Snake Island defenders remain in Russian captivity. Iryna Vereshchuk announced the number while speaking with the press on June 20. The island in the Black Sea was occupied by Russia at the very beginning of the full-scale invasion. Some of its defenders, including the author of the famous phrase “Russian warship, go f*ck yourself,” were released during prisoner exchange.

Our exclusive, on the ground stories

A corruption case against Pavlo Vovk, Ukraine’s most notorious judge, has been sent to the High Anti-Corruption Court on June 20. Vovk, head of the Kyiv District Administrative Court, has become a symbol of injustice, lawlessness, and impunity in Ukraine. Cases against him have been blocked and sabotaged by prosecutors, investigators, and courts for several years. Read our story on how Ukraine’s biggest judicial corruption case that was finally sent to trial.

According to Ukraine’s Armed Forces, over 2,600 rockets were fired at Ukraine within the first three months of Russia’s full-scale war, with nearly half of them launched from Belarus. Russian troops have also been permitted to receive medical treatment in the country and some have sent stolen goods from Ukraine back to Russia from Belarusian post offices. At the same time, a substantial number of the country’s residents have attempted to support Ukraine. Read our story on how Belarus people try to help Ukraine win even as their regime sides with Putin.

Russian strikes in Kharkiv region leave 3 civilians dead, 2 injured. Kharkiv Oblast Governor Oleh Syniehubov reported on June 20 that a 65-year-old woman was killed in the attack on Kutuzivka village, while two other people – 61-year-old woman and a 49-year-old man were killed in the city of Balakliya. Two other civilians were injured in Industrial District of Kharkiv city.

Death toll in Russia’s missile attack on oil depot in Dnipropetrovsk Oblast rises to 3. Additionally, 13 people were injured in Russia’s June 18 attack on the oil depot in Novomoskovsk District in the northeastern part of the Dnipropetrovsk Oblast, which caused a large-scale fire. According to Governor Valentyn Reznichenko, firefighters have been putting out the fire for more than 42 hours.

Bloomberg: All EU ambassadors reportedly support Ukraine’s bid ahead of historic vote. None of the EU ambassadors opposed the decision to support Ukraine’s bid to EU membership during their Monday meeting, Bloomberg reported on June 20 citing people familiar with the matter. The EU’s 27 member states are set to formally grant Ukraine candidate status in Brussels on June 23-24. Candidate status is also being considered for Moldova and Georgia should they meet the necessary conditions.

Taiwan’s FM pledges $500,000 in aid for Bucha. The funds will be used to rebuild the city that suffered heavy damage from Russia’s war, Joseph Wu said in a video call with Bucha Mayor Anatoliy Fedoruk. “Taiwan will continue to stand with Ukraine in its fight for sovereignty, freedom, and democracy,” he said.

Russian Nobel Peace laureate sells medal for over $103 million to help Ukraine’s refugees. Novaya Gazeta editor Dmitry Muratov, the Russian co-winner of last year’s Nobel Peace Prize, has sold his prize medal for $103.5 million at an auction to raise money for displaced children affected by Russia’s invasion of Ukraine. All proceeds will go to UNICEF to help Ukraine’s child refugees.

Bloomberg: EU looking to finalize $9.5 billion loan package for Ukraine. The plan is to provide Kyiv with 25-year loans, with a 10-year grace period to reimburse the principal, Bloomberg reports quoting three EU officials who added that interest payments would be covered by the EU budget. The aid requires approval from all 27 member states.

Zelensky meets with Hollywood actor, UN Goodwill Envoy Ben Stiller. The U.S. actor visited liberated settlements in Kyiv Oblast before meeting President Volodymyr Zelensky on June 20. Seeing the destruction caused by Russia’s war in person was much more striking compared to what he saw on TV, Stiller told Zelensky. The two also discussed the needs of the Ukrainian refugees and the issue of the illegal deportation of Ukrainian children to Russia.

Ukrainian court bans Kremlin-linked Opposition Platform – For Life party. According to the political watchdog Chesno, whose analyst was present at the hearing, the court ruled to ban the party and confiscate all its property. The party was led by Viktor Medvedchuk, close ally of Russian dictator Vladimir Putin and currently facing high treason charges. It is the eleventh pro-Russian party to be outlawed in Ukraine following Russia’s full-scale invasion.